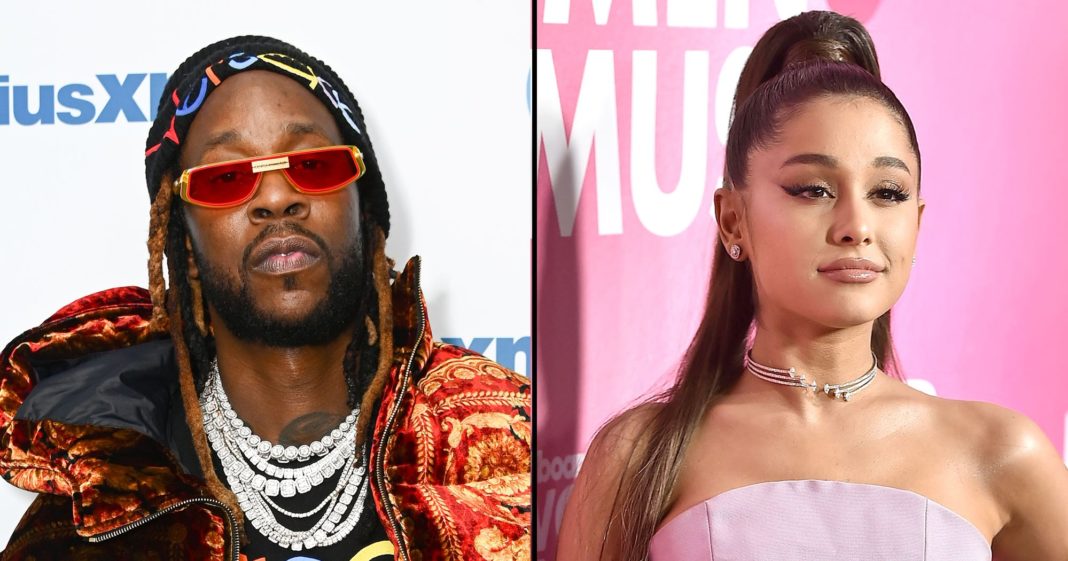 Putting the past behind them. 2 Chainz and Ariana Grande met up to discuss the accusations that her hit “7 Rings” sounded too similar to his song “Spend It.”

“I want to say it didn’t bother me, but once again, you don’t want to get caught up into that, ‘Man you’re petty,’” the 41-year-old rapper told Genius in a story published on Friday, March 1. “You know what I’m saying? Because I’ve thought that somebody has taken a little something out of my DNA before, and I haven’t said anything because I don’t want anybody … It’s supposed to be … what is it? Flattering, or whatever it’s supposed to be.”

Grande, 25, came under fire in January after she dropped “7 Rings” and the subsequently released the music video, which featured 2 Chainz’s pink trap house. The “Beez in the Trap” musician told Genius that he reached out to Grande through her manager.

“They set it up so we could actually meet and talk face to face,” he told the outlet. “I think that kind of changed everything because I started getting what was going on, having a clear understanding of what was going on. She was more or less saying that, ‘Well, yeah, I thought people knew I took it from you.’ And I said, ‘Well, how would people know that?’”

He added: ”What kinda points do I get off snapping on Ariana Grande or dissing her? I don’t get anything off that.”

The musicians then teamed up to record a “7 Rings” remix. Grande is also featured on 2 Chainz’s new album, Rap or Go to the League, which dropped on Friday.

In addition to 2 Chainz, rappers Soulja Boy and Princess Nokia spoke out and accused the pop star of ripping them off in her hip-hop-inspired hit. Grande responded to Princess Nokia’s criticism of the lyric, “You like my hair? Gee, thanks, just bought it / I see it, I like it, I want it, I got it (Yeah)” at the time.

“You like my hair? Gee, thanks, just bought it!!!! White women talking about their weaves is how we’re gonna solve racism,” she wrote in a since-deleted Instagram comment at the time.

Grande later apologized: “I think her intention was to be like … yay a white person disassociating the negative stariotype[sic] that is paired with the word ‘weave’ … however i’m so sorry if my response was out of pocket or if it came across the wrong way. thanks for opening the conversation and like … to everyone for talking to me about it. it’s never my intention to offend anybody.”