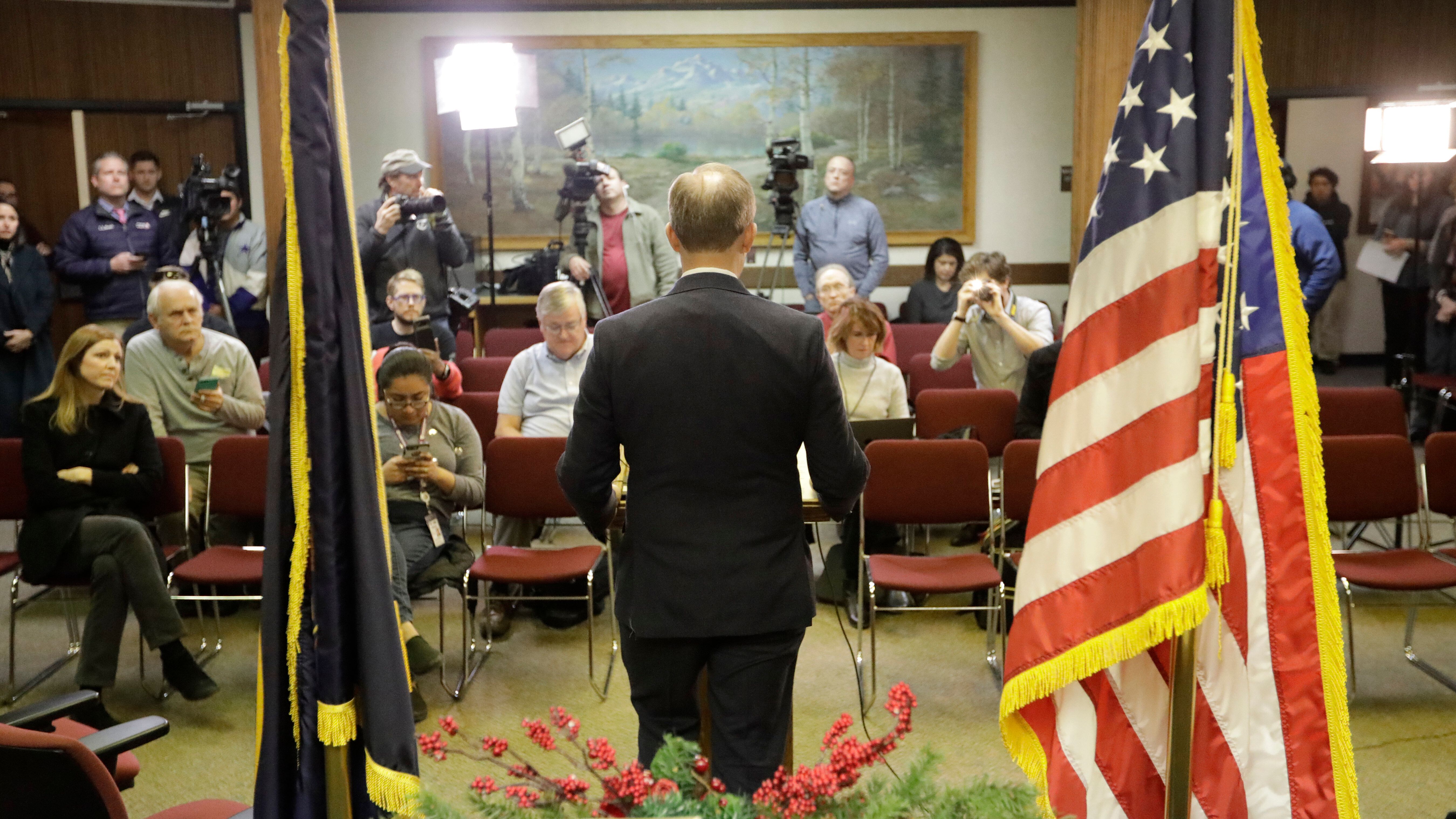 With a tight smile, the congressman made clear, in the heart of ruby-red Utah, that he will vote to impeach President Donald Trump.

The scene played out across the nation’s polarized landscape Monday as at least 31 of the most vulnerable House Democrats climbed off the fence and into the ranks of lawmakers who will vote for formal abuse and obstruction charges against Trump this week.

Trump faces two articles of impeachment brought by Democrats. One says he abused the power of the presidency by pressuring Ukraine to investigate Democratic rival Joe Biden. The other says he obstructed Congress by trying to block the House investigation and its oversight duties, thus thwarting the nation’s system of checks and balances.

The president “betrayed the Nation by abusing his high office to enlist a foreign power in corrupting democratic elections,” says the 650-page report from the House Judiciary Committee accompanying the charges. Trump withheld military aid from the ally as leverage, the report says, and that “Trump, by such conduct, has demonstrated that he will remain a threat to national security and the Constitution if allowed to remain in office.”

The House vote means Trump is on the brink of becoming only the third impeached president in American history.

The votes are crucibles for the Democrats who flipped competitive districts in 2016 and stand for their own reelections next November. At stake is the Democratic-controlled House, with Speaker Nancy Pelosi at its helm.

These Democrats have been reluctant at best to back impeachment, and one is poised to leave the party over it. Rep. Jeff Van Drew of New Jersey, who opposes impeachment, lost at least six staff members Monday after he told them he was switching parties to become a Republican.

With the stakes so high, Monday’s announcements on impeachment from the Democrats were tightly controlled, yet in some cases raucously received.

McAdams’ consisted of a press conference, a statement and no questions.

“I will vote yes, knowing full well the Senate will likely acquit the President in a display of partisan theater that Republicans and Democrats in Washington perform disturbingly well,” he said.

The scene was different in battleground Michigan, where Rep. Elissa Slotkin was both heckled and applauded as she declared that she’ll vote for both articles. Her experience as a former intelligence officer, she said, won out over questions about her political future.

“There just has to be some decisions that are beyond the political calculus. It may be that voters decide in 2020 that they don’t want me as their representative. I hope that’s not the case,” Slotkin said at a rowdy town hall in her Detroit-area swing district. Her state is a special focus of Trump’s. Vice President Mike Pence is taking a bus tour across Michigan this week, ending at Trump’s rally Wednesday in Battle Creek.

But with much of the attention turning to the Senate trial, the House Democrats already were pivoting to emphasize their work on issues close to home.

“I support the Articles of Impeachment,” said Rep. Joe Cunningham (D-S.C.), whose Charleston-area district supported Trump by double digits. His next sentence: “This process has not distracted me from delivering real results for the people of the Lowcountry.” He noted that the House has passed legislation to lower prescription drugs and ban offshore drilling.

Impeachment is sensitive in Virginia, too. Rep. Abigail Spanberger, a former CIA officer, long insisted on focusing on issues other than impeachment. Then a whistleblower report on Trump’s July 25 phone call with Ukraine’s president revealed a pressure campaign to benefit him politically. Spanberger and fellow Virginian Elaine Luria signed an op-ed calling for an impeachment inquiry.

“I am driven by facts and evidence to protect the integrity of our democracy,” Spanberger, who represents a Richmond-area district, said Monday when announcing she would vote for both articles.

Back out West over the weekend, Rep. Katie Porter spoke to a Tustin, California, town hall meeting for 12 minutes without mentioning impeachment. But it was the first question she was asked to answer, thanks to question cards drawn by lottery.

Porter laughed, saying, “I didn’t see this one coming.”

When she said she planned to vote yes, many in the audience burst into applause and stood up. A couple of boos were heard, but the room soon grew quiet again, and she said, “This is a sad occasion.”

“We understand this is a very grave action we are taking,” she added.