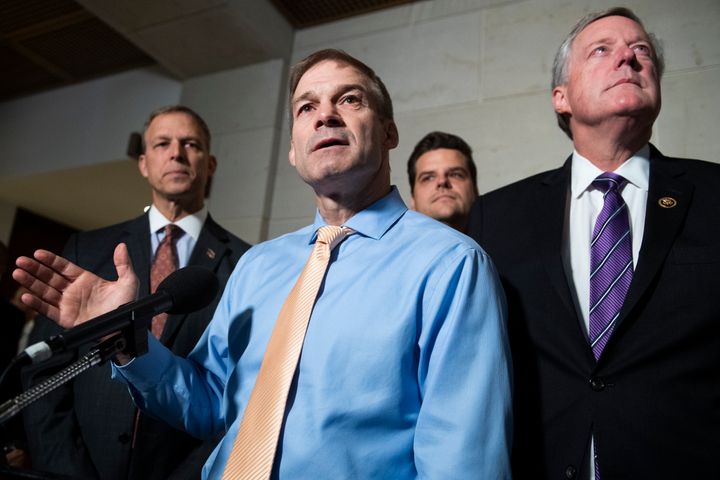 WASHINGTON ― With President Donald Trump headed for a partisan impeachment in the House and a largely automatic acquittal in the Senate, liberals like to console themselves that history will be unkind to Trump’s staunchest defenders in Congress ― that the Republican members turning a blind eye or offering bad-faith excuses for the president will rightfully be recorded as enemies of truth.

But if Trump’s biggest fans in Congress are concerned about their place in history, they’re not showing it.

“I don’t care how I’m remembered,” Rep. Jim Jordan (R-Ohio) told HuffPost. “I care that the American people elected this guy president, he’s doing a great job, and [the Democrats] have zero facts on their side to remove this guy from office.”

Jordan said he was worried about Democrats never accepting the 2016 election outcome, as well as the “arrogance” of people like Stanford law professor Pamela Karlan, who testified before the Judiciary Committee last week that Trump should be impeached.

“The arrogance that lady had for hillbillies like Jim Jordan from Ohio, or Mark Meadows from the mountains of North Carolina, or anyone across the heartland who voted for this president,” said Jordan, a seven-term congressman, “the disdain that she had for us, you know, regular folk.”

And if you think Jordan insisting he doesn’t care is just some defense mechanism because he knows it will turn out badly, Jordan will tell you that actually, he hasn’t given any of that “a second’s thought.”

“The first time that even entered my mind was 20 seconds ago when you asked me,” he said.

Meadows also reported that he doesn’t worry about his place in history.

“Most of the historical commentary will be about the process more than the individuals,” Meadows said.

And he claimed that history hadn’t really remembered specific members of Congress in past impeachment cases. “If you can find one member of Congress who can name more than 10 people who voted one way or another, I’ll treat you to a steak dinner,” he said.

Doug Collins, the ranking Republican on the Judiciary Committee, was similarly untroubled.

“History writes itself,” Collins said, adding that he was only concerned with doing what feels right.

“The person who decides what history is gonna say about him is a fool,” he said.

It makes sense that Republicans aren’t thinking about their place in yet-to-be-written textbooks; defending Trump on the Ukraine scandal almost requires a blithe ignorance of history’s judgment.

It’s not that the public doesn’t know the facts, or that there are legitimate defenses of Trump. The president clearly sought to use his office to pressure a foreign country to announce an investigation into one of his chief political rivals. And he was willing to withhold roughly $400 million in congressionally appropriated security aid to accomplish his goals.

In a rational world ― one unpoisoned by partisan excuses and conspiracies ― this impeachment would be unanimous. The facts are so damning, so overwhelming; and yet not a single House Republican cares.

In a rational world ― one unpoisoned by partisan excuses and conspiracies ― this impeachment would be unanimous.

Republican voters stand strongly behind Trump. And in many ways, the continued support of elected Republicans is best explained by their voters.

Trump’s popularity among congressional Republicans is partly a function of his support from the GOP electorate. When HuffPost asked Meadows last week what made him and the Freedom Caucus go all-in on Trump, Meadows presented the lawmakers’ support as a result of the will of the voters.

“The American people,” Meadows answered. “I mean, he tapped into a group of people that had been largely ignored.”

Meadows recounted that someone came up to him during the 2016 GOP convention in Cleveland and said, ‘Look what you’ve started.’

“‘Nah,’” Meadows recalled saying, ‘I just recognized it before anybody else.’”

What Meadows claims to have recognized is a frustration with business as usual in Washington. And in his cheerful view of Trump, the president is just a wrecking ball for the norms of Washington, much the same way the Freedom Caucus was a wrecking ball.

Jordan offered a similar take, that Trump was a guy who “was going to come here, and change this place, and get things done, and take on this town.”

But those tired lines gloss over the worst aspects of Trump ― policies that have separated families, undermined health care, hurt the environment or personally enriched the president — dismissing them like Trump’s quirks, such as his penchant for tweeting or going off the teleprompter at a rally.

“Oftentimes, we expect perfection from our leaders, and the minute I find a perfect leader, I will let you know,” he said.

Meadows also said he recognizes that voters largely don’t care about policy. “I don’t think that most Americans are policy-driven,” Meadows said. “It’s why many members of Congress make a huge mistake by getting up and giving stump speeches on what bills they’ve done.”

In that view, partisanship, not ideology or accomplishments, is what is most important to the Republican Party. Partisanship has become the core ideology. It perhaps explains why Rep. Justin Amash ― one of the most conservative members in Congress ― left the party and now, as an independent, is an enemy of the GOP. Or why one of Amash’s closest ideological allies, Rep. Thomas Massie (R-Ky.), has gone all-in on Trump. Massie recognized that he can almost always vote whichever way he wants, as long as his constituents know he’s ultimately with the president.

“I think some of them genuinely believe what they’re saying,” Amash said. “There’s no doubt about that. I’ve had conversations with them. They believe it. There are other people who know they’re lying.”

But the GOP has thoroughly disincentivized speaking out. There’s really no place for a Republican who breaks with Trump on something so fundamental as impeachment ― as Amash knows well.

The most interesting thing about asking Republicans how they think history will remember them when it comes to Trump’s impeachment is that no one really claims history will mark them down as heroes.

Even the most self-aggrandizing answers were offered as conditionals. Conservative Rep. Scott Perry (R-Pa.) said it was a stretch to think they’d be remembered at all, but if they were, their role would depend on the final outcome. According to Perry, Republicans could be remembered as “complete rubes” or as “unbelievable patriots.”

“We’re far from the final chapters of this whole thing,” Perry said.

One of the darkest answers came from Rep. Rob Bishop (R-Utah), a former history teacher himself. Bishop said the idea that history would remember what Republicans do assumes “that we’re going to survive in this country long enough to have a history.”

(When Bishop got a little more serious, he said he believed in doing what was right “and everything else will take care of itself.”)

The most interesting thing about asking Republicans how they think history will remember them when it comes to Trump’s impeachment is that no one really claims history will mark them down as heroes.

Not to discount Amash’s three categories, but the vast majority of Republicans really do seem to believe they’re doing what’s right ― or they’ve convinced themselves that it’s right enough.

Republicans have found so many ways to get behind Trump. Jordan reported that he liked Trump more and more every day, partly because the president is unafraid of doing things that so many politicians promise but fail to accomplish. His case in point was moving the U.S. embassy in Israel to Jerusalem.

But another reason the Freedom Caucus is so devoted to Trump is that he’s the empty policy vessel in which they can place their own ideas. Meadows and Jordan were two key architects of the GOP tax cuts, and they tout a number of other quieter wins.

Just last week, the administration formalized a new work requirements rule for food stamps that will result in roughly 700,000 people losing benefits. That policy was practically written by the Freedom Caucus.

Jordan also points to Trump’s transformation of the Republican Party from a country club “wine and cheese” base to a home for “beer and blue jeans” voters. “We’re a populist party rooted in conservative principles,” Jordan said.

And if you challenge Jordan that cutting food stamps for 700,000 low-income people doesn’t sound very populist, Jordan will respond that it’s “totally populism.”

“You go talk to the union workers in Wisconsin, ask them if they think there should be a work requirement for able-bodied adults on welfare,” Jordan said, “I bet it’s 100%.”

Whether Jordan realizes it or not, the explanation reveals another truth: For the modern GOP, perception is more important than reality.

It doesn’t really matter what Trump did; it matters what voters think he did, and if Republicans can throw enough dirt in the air, if they can convince enough of their voters that this is really about Hunter Biden, or about rooting out Ukrainian corruption, or that this is just another partisan witch hunt, the facts take a back seat.

At least at this moment. Maybe all Americans will one day recognize what’s painfully clear to anyone open-mindedly watching this spectacle. That’s the hope of many liberals, who don’t want to believe that Trump’s biggest defenders will get away with this.

As HuffPost left Jordan’s office on Friday, Intelligence Chairman Adam Schiff (D-Calif.) just happened to be standing in the hallway, alone, checking his phone. We approached Schiff and told him Jordan said the facts were on Trump’s side.

Schiff, in his own sort of disbelief that even Jim Jordan could believe Jim Jordan’s defenses, said the facts were “uncontested and overwhelming.”

“They apparently belong to the Kellyanne Conway School of Communications that believes they’re entitled to their own alternative facts,” Schiff said.

And he didn’t mince words on how he thought history would remember Trump’s most stalwart allies.

“History will not be kind to those that refuse to do their duty in the face of this unethical president,” he said.