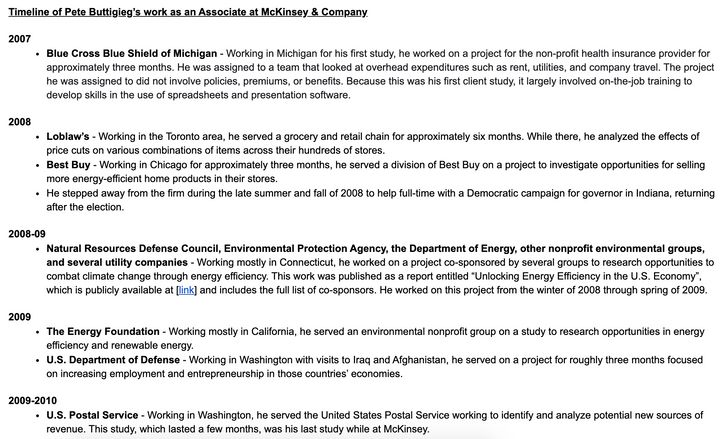 Pete Buttigieg Releases Names Of His McKinsey Clients
Democratic presidential contender Pete Buttigieg has released the names of the clients he worked with during his time at the controversial consulting firm McKinsey & Co.

The disclosure comes a day after McKinsey said it was releasing Buttigieg from a confidentiality agreement that the South Bend, Indiana, mayor had previously pointed to as his reason for withholding the names of his former clients.

The clients he named are Blue Cross Blue Shield of Michigan, Loblaws, Best Buy, the Natural Resources Defense Council, the Environmental Protection Agency, the Department of Energy, the Energy Foundation, the Department of Defense and the U.S. Postal Service.

He also said he worked for “other nonprofit environmental groups, and several utility companies,” but gave no more details on those.

“Now, voters can see for themselves that my work amounted to mostly research and analysis,” Buttigieg said in a statement. “They can also see that I value both transparency and keeping my word.”

He first revealed the list in an interview with The Atlantic.

“We recognize the unique circumstances presented by a presidential campaign,” a McKinsey spokesperson said in a statement on Monday, according to Politico. “After receiving permission from the relevant clients, we have informed Mr. Buttigieg that he may disclose the identity of the clients he served while at McKinsey from 2007 to 2010.”

Some of the clients Buttigieg worked with at McKinsey came under public fire during the years he consulted for them.

In 2007, the year Buttigieg worked for Blue Cross Blue Shield Michigan, the insurance group faced a major public outcry over its proposals to dramatically increase insurance premiums and severely limit coverage for people with preexisting conditions. BCBSM was the state’s “insurer of last resort,” meaning it was obligated to provide coverage to most Michigan residents who couldn’t get it elsewhere.

Buttigieg told The Atlantic that the work he performed for BCBSM was limited to analyzing administrative costs, such as rent, mail, travel and printing — feeding numbers into “a PowerPoint that my manager would take and then bring to a partner who I imagine eventually presented something to a decision maker.”

Still, some skeptics are raising questions about BCBSM’s overall mission in hiring McKinsey.

“As I know firsthand, when health insurers bring in consultants for things like ‘assessments’ and ‘cost cutting,’ those are code words for laying off workers, denying customers medical coverage, and raising their rates,” Wendell Potter, a former health insurance executive who now leads the advocacy group Medicare for All Now, told HuffPost.

MSNBC’s Rachel Maddow asked Buttigieg about the disclosure later on Tuesday, noting that BCBSM laid off nearly 10% of its employees in 2009, two years after he consulted for them while pressing him to say if his work was “part of what led to those” cuts.

“I doubt it, I don’t know what happened in the time time after I left, that was in 2007,” Buttigieg responded. “Now what I do now is that there are some voices in the Democratic primary right now who are calling for a policy that would eliminate the job of every single American working at every single insurance company in the country.”

Loblaws, the Canadian supermarket chain that Buttigieg worked for in 2008, has admitted to engaging in a price-fixing scheme on bread from 2001 to 2017.

Last week, Buttigieg had offered an overview of his work at McKinsey while calling on the firm to release him from the nondisclosure agreement.

As his presidential campaign has taken off, Buttigieg’s work at McKinsey has come under scrutiny. The consulting firm employs nearly 30,000 employees around the globe and has become infamous for taking on ethically questionable projects, such as advising authoritarian regimes.

Buttigieg has said his focus at McKinsey ranged from dealing with consumer goods to government contracts. In 2009, he visited Afghanistan and Iraq on behalf of the U.S. government for a project focused on employment in those countries.

“I never worked on a project inconsistent with my values, and if asked to do so, I would have left the firm rather than participate,” he said.

Here is the timeline Buttigieg shared, which describes the type of work he did at McKinsey:

This story has been updated with comment from Buttigieg and context about the companies on his client list.