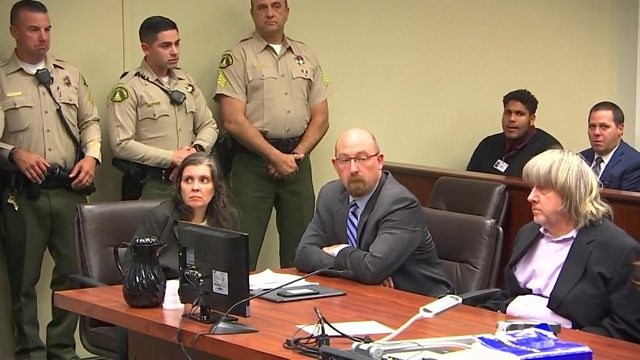 The parents accused of holding their 13 children in shackles at a California home have pleaded not guilty.

They were arrested after their daughter escaped from their home where police found some of her siblings chained to their beds and severely malnourished.

The couple appeared in court hours after prosecutors detailed the horrific abuse allegations against them.

Riverside County District Attorney Mike Hestrin said the couple had allegedly punished their children by tying them up – first using ropes and later chaining them to their beds with padlocks.

He said the alleged punishments would last weeks or months, and intensified over time.

The ‘happy family’ charged with torture

Prosecutors said circumstantial evidence showed the children were not released from their chains to go to the toilet.

The teenager who escaped and alerted police to the house where her siblings were held captive had been hatching a plan to leave for two years, Mr Hestrin added.

He detailed some of the gruesome allegations against the parents at a news conference on Thursday.

The shocking claims include:

This case has sent waves of revulsion across the US and beyond, and the small courtroom was packed as the defendants appeared.

David and Louise Turpin were smartly dressed. They occasionally glanced at each other across a table weighed down by a copy of the California penal code and a sheaf of paper related to the case against them. A lawyer sat between them.

Mr Turpin, with a distinctive mop of grey hair, was chained around the waist, his stomach protruding from beneath the metal links. His wife’s mouth was turned down in a glum expression.

The couple spoke only briefly and softly to confirm that they understood and accepted procedural details relating to their next hearing.

The charges they deny are among the most serious any parent could face: amounting to a grievous betrayal of their own children, a betrayal which prosecutors allege went on for years, if not decades.

The siblings themselves are said to be doing well but at least some of them have almost certainly suffered irreparable damage, both physical and mental from their ordeal.

The children, who are aged between 2 and 29 , have been treated in hospital since being freed on Monday.

The 2-year-old was of normal weight but the other children were severely malnourished, authorities said.

Several of the children have cognitive impairment and “neuropathy, which is nerve damage, as a result of this extreme and prolonged physical abuse,” Mr Hestrin said.

Though little is known about their education, some of the children were able to read and write. Mr Turpin also registered a private school in their California home, known as Sandcastle Day School.

Police have obtained hundreds of journals that the children were allowed to write in and are looking through them for evidence.

Before moving to California, the family lived in Texas.

At one point, the parents allegedly lived in a different house from their children and would drop off food from time to time, officials said.

If found guilty of the dozens of charges against them, the couple face 94 years to life in prison, Mr Hestrin added.

Mr Turpin also faces one count of “lewd act on a child under 14 years of age”.

Can anyone open a school at home in California?

The 13 children were found in an emaciated state in their filthy, foul-smelling house, police revealed earlier. Officers had at first thought all the children were minors but later realised some were frail and malnourished adults, they said.

Mr Hestrin said that when officers arrived, three of the couple’s children were chained to their beds.

Photo: House fire claims lives of father, mother and their three children in Jos, Plateau State
House Passes Children’s Health Bill, Sending Measure to Senate
Fire engineer dies as California’s Thomas Fire keeps burning
‘My husband tied me to tree’
Thirteen dead amid California heavy rains and mudslides
VP Osinbajo takes selfie with market women and children at Ikenne
Mother sells daughter for N280,000 to pay debt
2 men arrested for murder of 26 Nigerian girls, women killed in In Italy sea
Photos: Never too late for love! Man, 90, weds 83-year-old woman in Uganda
California wildfires have destroyed 1,000 structures … and counting
‘My name is Kunle Remi and not Adesua’s ex’ Nollywood actor reacts to reports claiming he was once Mrs Wellington’s boyfriend
Central Africa Republic: The country with no teachers
Juliet Ibrahim warns boyfriend If you mess me up Ghanaians will deal with you
Pope Francis tells breastfeeding moms it’s fine to feed hungry babies in church
More photos of Nigeria’s favourite couple, Banky and Adesua at their traditional marriage and details of their upcoming white wedding
I did it out of love and care” – Mother put her ‘naughty’ seven-year-old daughter in chains to protect her
Prince Harry: Stars were aligned when I met Meghan
Punk group attack ‘police state’ on Trump anniversary
Egg intake doesn’t cause heart attack – PAN