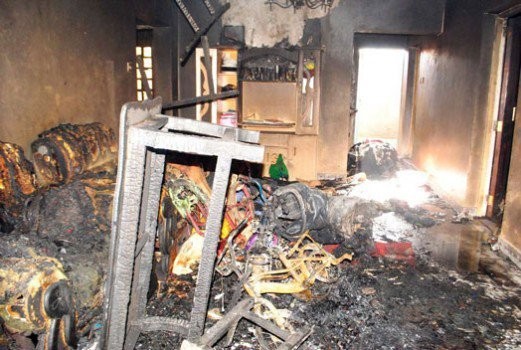 A Kenyan family of five including a man, his wife and their three children were all burnt to death in the early hours of Tuesday Jan. 16th in Juja, Kiambu county.

According to police reports, members of the public reported the fire incident at the home of one Patrick Nderitu Karuiru to the area chief in Kiambu county. When the area chief arrived at the scene, he found neighbours putting out the fire.

After they manage to put out the fire, Nairobi News reported that they found one burned body of the middle-aged man laying at the veranda door with the other four bodies in the bedroom. All three bodies of children, aged below 10 years, had visible head injuries, same to the body of their mother, Rosemary Kaninia.

The authorities in Kiambu county suspect the man murdered his wife and their three children before setting the house on fire.

Man narrates how he did his wedding introduction on the day he met his wife for the first time
Cache of jewels reported stolen from Paris’ Ritz may have been found — at the scene
Photo: House fire claims lives of father, mother and their three children in Jos, Plateau State
#TOY18: Check out Omawumi and her husband, Tosin Yusuf’s first and second look at their wedding
Lady breaks down in tears as her boyfriend rejects her marriage proposal (video)
Photos from actress, Oma Nnadi’s traditional wedding
Heartless mother buries her 3 month old son alive just so she could be with a ‘rich man’
WTF is wrong with people? Lady shares photo of herself with her friend taking a sh*t together
Neyo and his wife are expecting another baby after he made his ex tie her womb (photos)
Central Africa Republic: The country with no teachers
2 men arrested for murder of 26 Nigerian girls, women killed in In Italy sea
WTH? 10-year-old becomes the youngest sugar daddy and he’s sponsoring a model way older than him
This body on a 45-year-old is sick! (photos)
14 amazing things Meghan Markle can’t post once she’s a Royal
Ritual Murder Headless body of young girl found inside suitcase in Edo [Graphic Photos] The headless body of a young lady has been discovered stuffed inside a suitcase and dumped by the roadside in Edo State.
Photos; Aisha Buhari, VP Yemi Osinbajo, his wife Dolapo, state governors, Ministers, others throw President Buhari a surprise get together
Nigerian boy, 4, found dead after being kidnapped by his cousin for N5 million ransom