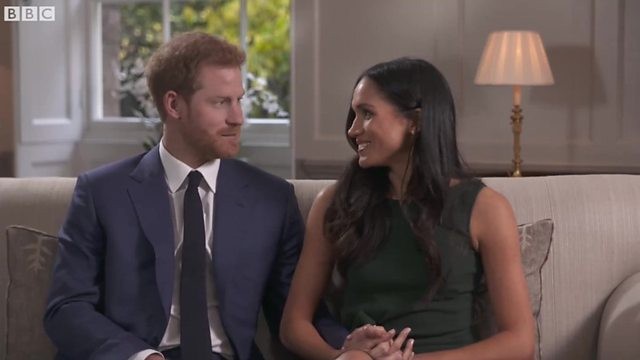 Prince Harry says he and US actress girlfriend Meghan Markle fell in love “so incredibly quickly” and it seemed proof that the “stars were aligned”.

The fifth in line to the throne was speaking after the couple announced their engagement and plans to marry in spring 2018.

The couple told the BBC’s Mishal Husain they met on a blind date and neither had known much about each other.

He believed Ms Markle and his late mother, Diana, Princess of Wales, would have been “thick as thieves… best friends”.

Prince Harry revealed he proposed earlier this month during a “standard, typical night for us” at his home in Kensington Palace as the couple were making roast chicken.

“It was just an amazing surprise. It was so sweet, and natural and very romantic. He got on one knee,” Ms Markle said.

Prince Harry said: “She didn’t even let me finish. She said ‘Can I say yes’.

“Then there were hugs and I had the ring in my finger.

Turning to Ms Markle, Prince Harry said: “And I think I managed to catch you by surprise as well.”

The 36-year-old star of US legal drama Suits confirmed she would be giving up acting and with her new role focus even more energy on the causes that are important to her.

She is already involved with humanitarian work and is a women’s advocate with the UN.

Ms Markle said: “I don’t see it as giving anything up. I see it as a change. It’s a new chapter.”

Turning to Prince Harry, she said: “Now it’s time to work as a team with you.”

The prince, 33, added: “I know that she will be unbelievably good at the job part of it as well.”

The couple described how they were set up on their blind date by a mutual friend, and then met once more before going camping together in Botswana.

“I think about three, maybe four weeks later I managed to persuade her to come and join me…

“And we camped out with each other under the stars… she came and joined me for five days out there, which was absolutely fantastic.”

Prince Harry said “both of us have passions for wanting to make change for good”.

Ms Markle said “one of the first things we started taking about when we met was just the different things we wanted to do in the world and how passionate we were about seeing change”.

She said it was “disheartening” there had been a focus on the fact her father is white and her mother is African-American.

“At the end of the day I am proud of who I am and where I come from… we’ve just focused on who we are as a couple.”

The couple declined to reveal the name of the mutual female friend who introduced them in July 2016.

But Ms Markle said she “didn’t know much” about Prince Harry before meeting him.

“The only thing I had asked her when she said she wanted to set us up, was ‘was he nice?’ If he wasn’t kind, it didn’t seem like it would make sense”.

The prince said he had not been aware of Ms Markle before their first meeting in London as he had never watched her TV show.

Earlier, the couple posed for photographs outside Kensington Palace in London, where they will live.

Prince Harry said he was “thrilled”, while Ms Markle said she was “so very happy”.

Ms Markle, wearing a white belted coat, held Harry’s hand as they appeared briefly for the press at the palace’s Sunken Garden, and showed off her diamond engagement ring.

Asked by a reporter when he knew Suits star Ms Markle “was the one”, Prince Harry said: “The very first time we met”.

The announcement of their engagement was issued by Clarence House on Twitter, the Prince of Wales and Duchess of Cornwall’s official residence, and said details about the wedding day would be unveiled “in due course”.

Downing Street said there are “no plans” for a bank holiday on the day.

Ms Markle’s engagement ring was designed by Prince Harry and features two diamonds which belonged to his mother.

The band is made from yellow gold and at the centre is a diamond from Botswana.

Ms Markle said it was a sign of “Harry’s thoughtfulness”.

She had obviously not been able to meet his mother, she said, but it was “so important to me… to know that she’s a part of this with us”.

Ms Markle said she had met the Queen a couple of times and described her as an “incredible woman”.

The Queen’s corgis are said to have taken to her “straight away”.

Asked about having children, Prince Harry said: “One step at a time and hopefully we’ll start a family in the near future.”

Ms Markle grew up in Los Angeles and attended a private primary school before studying at a girls’ Roman Catholic college. She graduated from Northwestern University School of Communication in Illinois, as her acting career was beginning.

The Archbishop of Canterbury said he was “absolutely delighted” at the engagement announcement and indicated the couple would have a church wedding.

She was previously married, but the Church of England agreed in 2002 that divorced people could be allowed to remarry in church.

2017 ‘very likely’ in top three warmest years on record
‘My mother encouraged to travel to Abidjan for prostitution
US to stop arming anti-IS Syrian Kurdish YPG militia – Turkey
13-years old girl narrates how uncles took turns to rape her
Rihanna to co-host ‘Controversial’ 2018 Catholic Couture inspired edition With Anna Wintour as host, Rihanna, Amal Clooney and Donatella Versace supporting, the MET Gala 2018 theme is controversial!
See the shocking thing a woman did to her stepdaughter in Lagos
More photos of Nigeria’s favourite couple, Banky and Adesua at their traditional marriage and details of their upcoming white wedding
5 kid-robbers arrested by OPC members while burgling shop A gang of kid-robbers who invaded a shop late in the night in Ogun State were saved from lynching by men of the OPC after they were caught.
Lol…you guys play too much….
‘When a man calls you a whore, call his mother a whore too..it hurts them so bad’ – Anita Joseph speaks out against slut shaming
Nigerian student jailed for raping 12-yr-old girl in the UK Another Nigerian student in a UK university has been sentenced to five years in prison for raping a 12-year-old girl he met on the Internet.
CAMILA CABELLO FEAT. YOUNG THUG – ‘HAVANA’
Juliet Ibrahim warns boyfriend If you mess me up Ghanaians will deal with you
Check out some of the well-dressed celebs at the #REVOLVE Awards (Photos)
Zimbabwe: Emmerson Mnangagwa to succeed Mugabe as president
Wizkid, Davido Pop stars reportedly clash in Dubai as beef deepens
UK minister Priti Patel resigns over secret Israel trip
Touching video of 8-year-old girl who suffered a brain aneurysm responding to her mother’s voice in the hospital