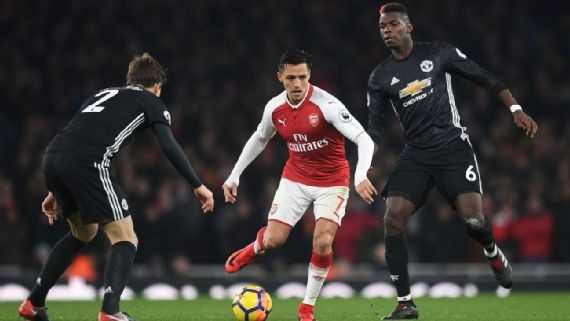 In the most optimistic minds at Old Trafford, Alexis Sanchez will play for Manchester United at Burnley on Saturday. To do so, he’d have to complete his transfer from Arsenal by noon in the UK on Friday — and the club’s fax machine would have to be in working order.

Fans appear almost unanimous that this would be a positive signing. Sanchez is fast, strong, versatile and will boost a squad with some deficiencies. United chased him as long ago as 2011 and were prepared to make him the club’s most expensive player. Back then, Barcelona and Manchester City also wanted him; Sanchez’s order of preference was Barca, where he ended up, followed by United, then City.

He’s finally set to arrive at Old Trafford and the deal is right, not only because the transfer fee is so small for a top-level player or that it prevents City getting one of their transfer targets. It’s about the first time United have landed a blow on their cross-town rivals this season, though revision and distortion means the truth will be corrupted; football often does two or more versions of what is real.

Sanchez’s reported wages and associated costs are huge and bear no relation to the reality that most people know. If they did, and ticket prices increased by 30 percent, then it would be an issue to fans, but barring Sevilla’s Champions League policy, ticket prices have stopped going up even as football’s wages have spiralled.

Player wages have long been eye watering. For example, my uncle Charlie, who played 162 times for United, accepted £100 a week to play in Colombia in 1950; he was on £11 a week at Old Trafford. The first person he told was legendary manager Sir Matt Busby, who responded: “Do they want a manager as well?”

Forty-one years later, Busby stepped down from United’s board in protest at the £1.5 million fee — a British record — that was paid to West Brom for Bryan Robson. Three years later, the club was receiving offers of £3m for their captain.

Robson was pretty much the first United player to afford to buy one of the best houses on the best streets in South Manchester; it took 100 years of football to get to that point. Even in the 1960s, when United were European champions, most players lived in areas that would be described as more working- than middle-class.

Now, there are scores of houses across Cheshire, which are largely obtainable only by the many top-flight footballers who live within 20 minutes of Manchester Airport. If they move, they simply sell them or, if they fail to buy a buyer, rent them to another footballer. It’s a market within a market.

Hopes are high for Sanchez. He’s a fully-formed star, who was exceptional at Udinese, good at Barcelona — a ludicrous chip in El Clasico was his highlight — and one of the Arsenal’s best. Let’s call him a Robin van Persie-class player, one who gets frustrated when they realise they’re at a club that isn’t going to win the league.

But there should also be some caution. After all, Angel Di Maria was one of the best players in the world when he joined United in 2014 and he left after one season. Sanchez is familiar with the Premier League but, amid the excitement that such transfers bring, signing players is not an exact science, as United have found many times.

Sanchez would be the second Chilean to move to Old Trafford — his fellow countryman Angelo Jose Henriquez failed to make a first-team appearance after signing in 2012 – and the latest in a growing list of South Americans. The first was Juan Sebastian Veron, a hugely-talented Argentinian midfielder who arrived in 2001, four years after Sir Alex Ferguson failed to land another Chile international forward, Marcelo Salas.

Fans were delighted and shirts bearing Veron’s name outsold those of another new signing, Ruud van Nisetlerooy, by 3:1. However, he left with regrets after two seasons. United smashed their pay structure to sign Veron and the £80,000 per week figure haunts former chairman Martin Edwards to this day.

Language has been an issue for some, not that speaking only a little English has done Antonio Valencia — United’s best-ever South American player and current captain — any harm. On the flip side, Diego Forlan spoke flawless English when he joined in 2002, but wasn’t quite so accomplished in front of goal.

As it would for anyone moving to a new city, it can take time to get used to life in Manchester, though adjusting is easier than in the past. Brazilian World Cup-winner Kleberson joined United in 2003 and, as well as having problems with food — he once told me in an interview that he had to drive to London to get the correct beans and rice — admitted that living in a new country with a pregnant, teenage wife wasn’t easy. That baby, Klebinho, remains proud of the Manchester birthplace on his passport.

Among United’s current squad, Argentineans Marcos Rojo and Sergio Romero will be on hand to welcome Sanchez, against whom they have played many times at club level and in South American World Cup qualifying. And there are plenty of other Spanish speakers at United, including Jose Mourinho.

Sanchez can make a difference at Old Trafford and has what it takes to become the best attacking player at one of the biggest clubs in the world. The stage is set for him and that’s why this transfer is so appealing.

United are also bigger in Chile than any other English club, one reason why they have an official wine partner from the country, for which Wayne Rooney once infamously provided a spot of wooden acting as part of an advert. Perhaps Sanchez can also assume — and elevate — that role.