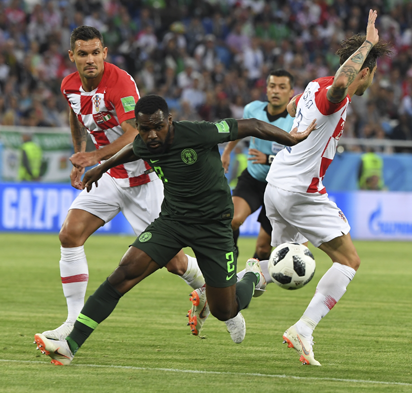 Rohr urged to revert to 4-4-2 formation, play players in best positions
Arthur Ebunam, ex-Rangers International has blamed the Super Eagles’ 0-2 loss to Croatia in their World Cup opener on wrong positioning of players and formation not amenable to scoring goals. Nigeria vs Croatia Nigeria’s defender Brian Idowu (C) plays the ball during the Russia 2018 World Cup Group D football match between Croatia and Nigeria at the Kaliningrad Stadium in Kaliningrad on June 16, 2018. / AFP PHOTO Ebunam said this while speaking in Awka on Sunday. He said the 4-2-3-1 formation adopted by Gernot Rohr was inimical to attacking football, adding that the players were also unable to interpret it to yield the required results. According to him, the head coach must adopt the natural 4-4-2 formation to mount maximum pressure on Iceland on June 22. “The coach must change his attacking formation to be enable the country to secure impressive results in their next match against Iceland on June 22,’’ he said. Ebunam also said the stage was now set for Rohr to showcase his technical knowledge, adding that he must be on his toes during matches to read the games well. He further said the incoherent pattern of play by the team could also be blamed on the coach’s deployment of the players, adding that Captain Mike Obi was wrongly used in the first game. “Mike was successful as a forwarder about 13 years ago; he is now a defensive midfielder setting behind number four to absolve the heat and to make long passes to the forwarders. “The formation that the coach played was ridiculous, the 4-4-2 formation would ensure deployment of Alex Iwobi on the left midfield and Victor Moses on the right. “His substitutions were also late and faulty. Kelechi Iheanacho and Ahmed Musa did not make any impact because of the coach’s strange formation. “I would rather see Odion Ighalo and Sylvester Nwankwo on the attack, while Mikel Obi and Onyinye Ndidi hold on to the midfield in the next game,’’ he said. The veteran footballer who also played for Mighty Jets of Jos and El-kanemi Warriors of Maiduguri said the success and failure of the team was in the hands of the coach, adding, however, that the team had the capacity to turn the adversity around if properly tutored. (NAN)
Share
Facebook
Twitter
WhatsApp
Pinterest
Linkedin
ReddIt
Email
Print
Tumblr
Telegram
Mix
VK
Digg
LINE
Viber
Naver
Previous articleGermany 0-1 mexico, Germany crash to Mexico in their opening matchWorld Cup
Next articlesenegal lift africa up by winning the match with poland yesterday 2-1 since world cup 2018 in Russia