North Korean leader, Kim Jong-un pictured with his daughter for the first time at a missile launch 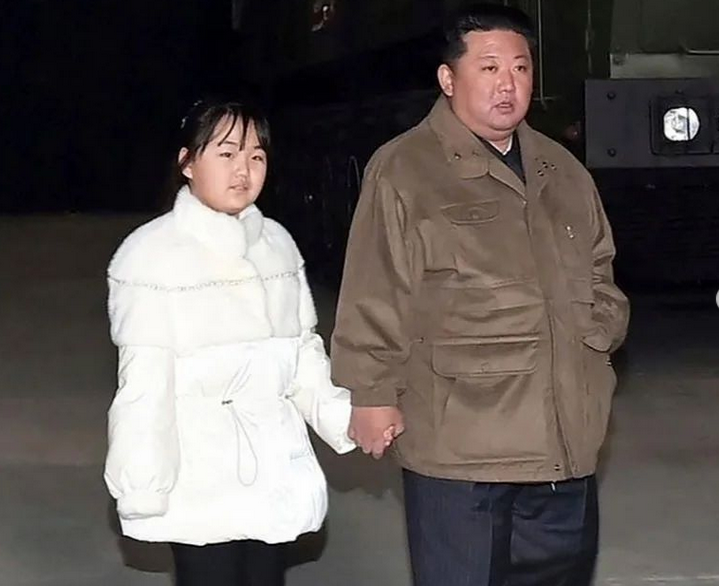 North Korean leader Kim Jong-un has been seen holding hands with his daughter as they were pictured for the first time in public at the launching of an intercontinental ballistic missile.

This is kind of big news in the region because his children are not allowed to be mentioned in the media and he’s never shown up to a public function with any of them before. Nobody even knows how many children he has.

Kim’s daughter is rumored to be called Ju Ae and could be around 12- or 13 years old.

Michael Madden, an expert on the North Korean elite, is sure that the pictured girl is Kim’s daughter and that the leader was making a statement with the image.

“The nuclear weapons program and Kim Jong-un’s accomplishments around them is a family legacy for whoever his successor is,” he said.

“So, what we are seeing, is Kim telecasting that fourth-generation hereditary succession is highly likely to happen. This is intended to communicate it to the wider North Korean elite as well as to foreign governments,” he added

Kim oversaw the firing of the Hwasong-17 missile with North Korea’s neighbors saying they had detected the launch of an ICBM potentially capable of reaching the continental US.

The launching of an intercontinental ballistic missile was the second major weapons test this month and Kim said the launch confirmed North Korea has another “reliable and maximum capacity” missile, as he warned the United States and its allies that their alleged provocative steps would lead to “their self-destruction,” state media reported.

Some foreign experts said the Hwasong-17 missile is still under development but is the North’s longest-range ballistic weapon designed to carry multiple nuclear warheads to defeat US missile defense systems.

The latest launch is part of a flurry of missile tests that are seen as an attempt to expand its weapons arsenal and boost its leverage in future diplomacy.