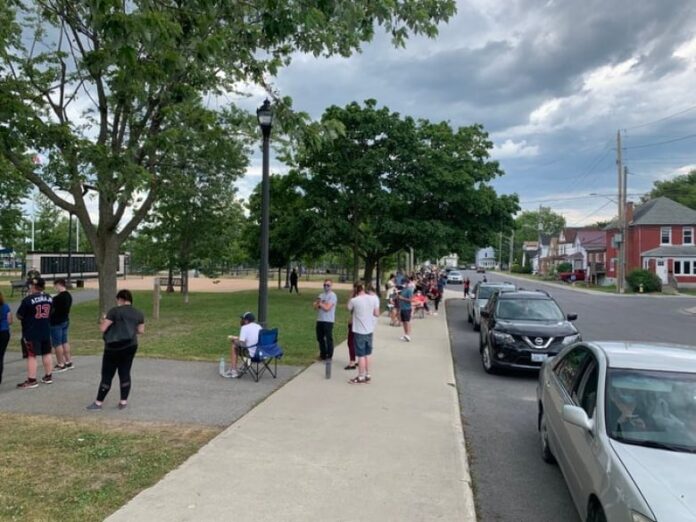 The city of Kingston, Ont., has decided to make mask use mandatory for workers and customers at many indoor public locations following an outbreak of COVID-19 at a local nail salon.

As of Friday afternoon, there were 16 confirmed COVID-19 cases involving people who work at Binh’s Nails and Spa, visited it or are connected to someone who did — almost a quarter of the area’s total known cases.

Kingston, Frontenac and Lennox & Addington Public Health declared an outbreak at the west-end salon Thursday and closed it until further notice.

On Friday, Medical Officer of Health Dr. Kieran Moore told reporters he’d signed an order requiring mask usage at a wide variety of establishments and public settings, including but not limited to:

The order, which takes effect when the clock rolls over to Saturday, does not apply to schools or hospitals, or to private businesses not open to the general public.

People with medical conditions that prevent them from using face coverings will be exempt, the health unit said, as will children “chronologically or developmentally” younger than five years old who refuse to wear a face covering and can’t be persuaded to.

Establishments that fail to respect the order could be fined up to $5,000.

“We are not blaming any particular business, but we must learn from this,” Moore said.

“We believe this is prudent, proportionate to the risk, and it’s very reasonable to embrace this now as a lesson learned.”

The 16 new cases — initially reported Friday as 18 but revised downward Friday afternoon — would mean the area has had 79 confirmed cases, just two of them in May and none in June until this week.

The public health agency said Thursday anyone who visited the salon after June 12, when it was allowed to reopen under Ontario’s Stage 2 of lifting restrictions, must get tested and self-isolate until 14 days after their visit.

Moore said he was “saddened” to learn the salon wasn’t following two-metre physical distancing rules nor cleaning properly between sessions. While workers at the salon were wearing masks, that wasn’t always the case with customers, he said.

The first confirmed new COVID-19 case involved a health-care worker who visited the salon, developed a fever and chills at work, went home and got tested, he said.

Other positive cases involve corrections workers, Moore said, although there was no indication the coronavirus had infected anyone in either a health-care or correctional setting.

None of the new cases had any travel history “outside of our community,” he added.

A one-day testing site will be set up Sunday in the parking lot of St. Lawrence College in Kingston from 9 a.m. to 2 p.m., with priority given to anyone who may have a connection to the salon outbreak.

The Kingston health unit is one of a small but growing number of Canadian jurisdictions to declare mask usage mandatory in most indoor public spaces.

In Ontario, the Windsor-Essex County Health Unit and Wellington-Dufferin-Guelph Public Health have already implemented such rules around face coverings, while the Montreal suburb of Côte Saint-Luc will make them mandatory starting July 1.

Some Ontario transit agencies have declared mask usage mandatory on buses, streetcars and trains, including Toronto, Hamilton and Guelph.

In Ottawa, the first Canadian city to introduce such a policy, passengers have been required to cover their faces since June 15, although for now no fines are being issued.

Dr. David Williams, Ontario’s chief medical officer of health, said earlier this week those kinds of decisions would be left in the hands of municipalities, rather than implemented provincewide.

Ontario Premier Doug Ford said on Friday the Kingston outbreak is a concern but shows the contact-tracing system is working because health officials were able to quickly reach hundreds of contacts.

Given that Kingston had gone nearly one month without any new COVID-19 cases, the outbreak may be a sign residents have “a little bit of fatigue” when it comes to obeying physical distancing rules, Mayor Bryan Paterson said.

Paterson said about 500 people had visited the salon since it reopened and roughly 700 people are now in self-isolation. While he said he expected the number of positive cases would keep rising over the coming days, he was also confident the city would get the outbreak under control.

“The good news is that we caught it when we did. And so we think that we’ll at least be able to prevent it from spreading too far,” Paterson told CBC.