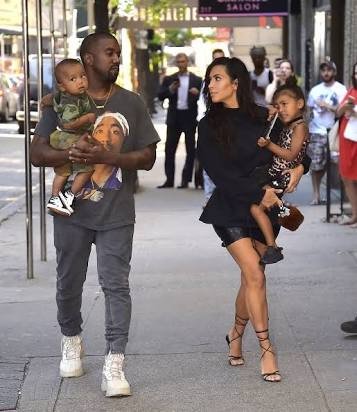 Kim Kardashian and Kanye West have named their third child Chicago West, E! News reported, and the reason behind the name has been revealed.

Chicago is Kanye’s hometown but asides that, there is another reason why the couple chose that name.

“Kanye came up with the name and Kim loved the significance behind the name. It was a mutual decision, which they discussed and agreed upon together.”

Another insider explained Kanye wanted to pay homage to his hometown and his late mother, who died in 2007.

This isn’t the first member of the Kardashian-West family member to have a unique name.

A source said their son was named Saint because of Kim’s highly publicized, rocky pregnancy. The insider said Saint was picked as a way of saying he is “a blessing,” especially “because she had such a difficult pregnancy.”

The reason why their first daughter was named North West was explained by Kim and Kanye to Kris Jenner who in turn explained it to the ladies of The View.

“I love the name North — I’m pro North, absolutely. The way [Kim] explained it to me was that North means highest power and she says that North is their highest point together. I thought that was very sweet.”

In Germany Plan to name train after Anne Frank condemned Plans by Germany’s national rail provider to name a train after Jewish diarist Anne Frank came under fire Monday, with a foundation saying it “caused new pain” to those who experienced deportations.
YO GOTTI FEAT. CHRIS BROWN – ‘SAVE IT FOR ME’
Insta Choir X Frank Edwards X Chee – Let Your Name Be Glorified
5 kid-robbers arrested by OPC members while burgling shop A gang of kid-robbers who invaded a shop late in the night in Ogun State were saved from lynching by men of the OPC after they were caught.
Sean ”Diddy” Combs Changes His Name to ”Brother Love” on His 48th Birthday
Covenant University School allegedly rejects PhD applicant because his surname sounds ‘fetish’ A PhD applicant alleged that the panel ostensibly rejected him because of his surname.
‘My name is Kunle Remi and not Adesua’s ex’ Nollywood actor reacts to reports claiming he was once Mrs Wellington’s boyfriend
Maroon 5 Whiskey ft. Asap Rocky