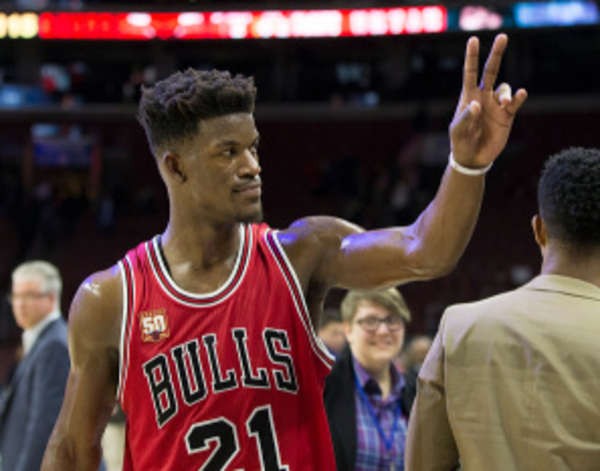 The Butler has landed.

Three-time All-Star Jimmy Butler, acquired by the Timberwolves in a splashy draft night trade, arrived in his new home on Sunday. According to the Minneapolis Star-Tribune, Butler was greeted at Minneapolis-St. Paul International Airport by Timberwolves coach Tom Thibodeau and general manager Scott Layden after spending time in Paris for men’s fashion week.

The Timberwolves posted a video greeting from Butler on Twitter, in which he said “I’m ready to win, I’m ready to lead and ready to get this thing on track.”

Can’t wait to get to work. #PowerOfThePackpic.twitter.com/nSY902FVnp

Per the Star-Tribune report, Butler will be introduced by the team this week.

The Timberwolves are hoping Butler, along with budding stars Karl-Anthony Towns and Andrew Wiggins, can help snap the franchise’s 13-year playoff drought. They landed the five-year veteran on draft night for Zach LaVine, Kris Dunn and No. 7 pick Lauri Markkanen.

Butler averaged a career-high 23.9 points per game last season, marking the fourth straight campaign in which he increased his scoring output. He’s also recognized as one of the NBA’s better defenders, making second-team All-Defense three times.