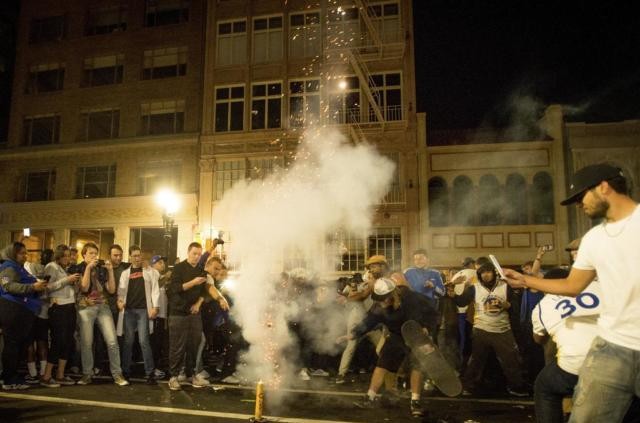 The parade will take place Thursday morning in downtown Oakland, following the same route as the team’s parade to celebrate the 2015 NBA title.

It will start at 10 a.m. at Broadway and 11th Street, wind through downtown streets and end with a procession to the Henry J. Kaiser Convention Center.

Fans are encouraged to line up for the parade and rally as soon as 5 a.m. Thursday and taking public transportation is encouraged.

Following the victory Monday night, warriors’ fans danced in the streets in downtown Oakland and wildly honked their horns in San Francisco.

The party began as soon as Kevin Durant, Stephen Curry and the Warriors beat the Cleveland Cavaliers 129-120 at Oracle Arena to clinch their second championship in three years.

In San Francisco, people hung out of cars waving blue and gold flags.

Across the bay, in downtown Oakland, about 1,000 people celebrated in the streets, but most were peaceful. Crowds gathered in intersections, including one where cheering fans made a circle to watch several men breakdance. Some climbed street lights, some sprayed champagne and some threw bottles leaving broken glass in streets. Others set off fireworks.

One car was damaged when fans jumped on its roof, police said.

Police issued more than 40 citations and towed at least 30 cars that were driving recklessly on city streets following the win, according to Oakland police spokeswoman Johnna Watson.

Between 400 and 500 spectators and vehicles participated in “sideshow” activity in East Oakland on Monday night and some revelers threw rocks and bottles at officers, though no serious injuries were reported.

The Warriors won the title in 2015 before the Cavaliers made their historic comeback last year. Then it was Golden State’s turn again, taking the title in five games.