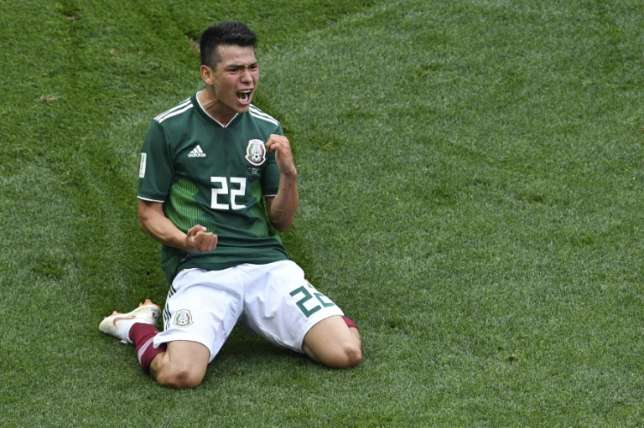 World Cup holders Germany crashed to a 1-0 defeat to Mexico in their opening match on Sunday, seriously complicating the rest of their tournament.

World Cup holders Germany crashed to a 1-0 defeat to Mexico in their opening match on Sunday, seriously complicating the rest of their tournament.

The electrifying Hirving Lozano smashed the winner in the 35th minute, leaving Manuel Neuer clutching at air on his return to the German goal after a 10-month absence due to injury.

Toni Kroos crashed a shot against the crossbar for Germany but they were never able to get back in the match at the Luzhniki Stadium in Moscow as they slid to their first defeat in their opening game of a World Cup since 1982.

“I don’t know if it’s the biggest win in (Mexico’s) history but doubtless it is one of the biggest for sure,” Lozano said.

The loss leaves the Germans in a precarious position, chasing the Mexicans in a Group F that also includes Sweden and South Korea.

If Germany finish as group runners-up, they could face Brazil in a clash of World Cup titans in the next round — a perfect chance for the Brazilians to revenge the humiliating 7-1 defeat to the Germans on home soil in 2014.

Brazil, and their star Neymar, were set to make their bow in Russia later Sunday against Switzerland in Rostov-on-Don.

Four years after injury cut short his World Cup — Brazil suffered that defeat to Germany without him — Neymar is once again spearheading his country’s hopes.

The Paris Saint-Germain striker’s participation at the finals in Russia had been cast into doubt after he suffered a broken bone in his right foot in late February.

play Neymar will start against Switzerland

However, the 26-year-old forward has shown few signs of rust since returning for Brazil, scoring in consecutive friendlies in the buildup to the finals and he will start on Sunday

That could spell trouble for their Group E opponents Switzerland.

Brazil coach Tite, who masterminded a dominant qualifying campaign that saw the “Selecao” finish 10 points clear of their rivals, said Neymar was “not 100 percent”.

“But he has exceptional physical qualities, his speed in particular. In any case, he is in a suitable state to play,” Tite said.

Neymar is the focal point of one of the most menacing attacks in the tournament, and lines up in a front four that includes Gabriel Jesus, Philippe Coutinho and Willian.

Germany had breezed through qualifying, scoring 43 goals and conceding just four and, astonishingly, they average almost four goals a game in their opening World Cup matches since last losing their first tournament game in 1982 against Algeria.

Coach Joachim Loew has, like the Brazilians, transformed the team from 2014 to the extent that the man who scored the World Cup winning goal in Rio, Mario Goetze, is not in the squad.

But his plans to become only the third side in the World Cup’s 88-year history to successfully defend their title were in disarray on Sunday after the Mexicans tore into his defence from the start.

Mexico only lost one game in qualifying and have always reached at least the second round of every World Cup they have played.

Serbia beat Costa Rica 1-0 thanks to a brilliant Aleksandar Kolarov free-kick in Samara in the first game of the day.

The victory puts Serbia in a strong early position in Group E ahead of games against Brazil and Switzerland as they look to reach the last 16 for the first time since becoming an independent country.

Costa Rica, meanwhile, now face an uphill task to repeat their surprise run to the quarter-finals four years ago in Brazil.

Away from the football, Russian authorities said a taxi driver who ploughed into pedestrians on a pavement near Red Square in Moscow on Saturday, injuring at least seven people, had been suffering from exhaustion.

The taxi driver, a 28-year-old man from the central Asian republic of Kyrgyzstan, told police during questioning that he had been working for 20 hours solid before the incident and had mixed up the brake pedal and the accelerator.

The incident occurred about 200 metres (yards) from Red Square, which was packed with foreign football fans snapping pictures of the Kremlin on a warm and sunny afternoon.

And a space for gay and ethnic minority football fans in Saint Petersburg during the World Cup was forced to relocate at the last minute in a move activists believe was politically motivated.