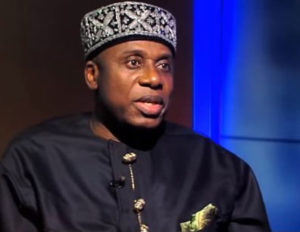 Minister of Transportation, Mr. Chibuike Amaechi, yesterday, said Nigeria’s rail line would cover Western corridor of the country traversing nine states and the Federal Capital Territory, Abuja spanning a total of 1,402 kilometres. Amaechi at the Forum of China-Africa Transportation Convention in Beijing, China entitled, ‘Better Transportation, Better World,’ yesterday, said the project would be completed in 36 months as soon as the loan agreement was reached between Nigeria and China Amaechi Amaechi The minister said: “This railline, a total of 1,402Km, which covers the Western corridor of Nigeria traverses nine states of our federation and the Federal Capital Territory, Abuja and is expected to be completed within three years if the expected loan agreement with China EXIM Bank for co-financing is reached as expected.” On the Lagos-Kano railway project awarded to China Civil Engineering and Construction Company, CCECC, and co-financed by China EXIM Bank, Amaechi said the project will serve as an important distribution corridor between the major sea port of Lagos and the hinterlands. He noted that the investment and partnering were imperative in our cooperation with the Peoples Republic of China to strengthen Nigeria’s transport infrastructure and contribute towards building a competitive economy. “Nigeria is also partnering other private sector investors, foreign and domestic, including the consortium led by the United States General Electric. “The successful realization of these projects and their operations will result in attainment of high level of intermodal transport system,” he said. The Ministry of Transportation recently signed the commercial contract for the remaining 901 Km Ibadan – Kano stretch and the associated branch lines from Oshogbo to Ado Ekiti, South West Nigeria following the completion of the first segment of the line, Abuja – Kaduna railway project of 186.5Km. Amaechi said that the completion of the Abuja-Kaduna project had tremendously improved citizen’s mobility between the important Northern commercial city of Kaduna and the Federal Capital, Abuja, adding that the project had been completed and commercial train operation has commenced since July, 2016 conveying close to a million passengers. While the construction of the second segment which is 162Km Lagos – Ibadan double track rail line is ongoing, Amaechi said that Nigerian Government and other African Governments had put effort at sourcing financiers for development of critical infrastructure especially its transport infrastructure – railways and ports.
Share
Facebook
Twitter
WhatsApp
Pinterest
Linkedin
ReddIt
Email
Print
Tumblr
Telegram
Mix
VK
Digg
LINE
Viber
Naver
Previous articleIn Borno 2,043 return home after years in Maiduguri IDP camp
Next articleFAAN tightens security at airports following reports of ISIS sneaking jihadists into Nigeria