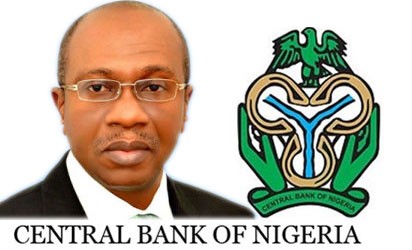 Emefiele – Nigeria’s external reserves’ll soon hit $50bn
THE Governor of Central Bank of Nigeria, CBN, Mr. Godwin Emefiele, yesterday, predicted that the nation’s foreign reserves would soon hit $50 billion mark. He made the prediction while speaking at the 25th CBN seminar for Finance Correspondents and Business Editors in Uyo, Akwa Ibom State, yesterday. According to him, the reserves have currently risen to $47.4 billion as at April 5. CBN Governor, Mr Godwin Emefiele Represented by Deputy Governor, Corporate Services, Mr. Edward Adamu, Emefiele said policies of the CBN in recent times helped the country to navigate its way out of economic recession, warning that the nation must remain vigilant and build on the post-recession gains in order not to relapse into another cycle of recession. He said: “Foreign exchange supply has improved since the establishment of the Investors and Exporters, I&E, window, with autonomous inflows of over $20 billion through this window alone from April 2017 to date. “Foreign exchange reserves have recovered significantly from a low of just over $23 billion in October 2016 to about $47.37 billion as at April 5, 2018. Foreign exchange reserves will continue to grow. Following recent accretion, FX reserves may be about $50 billion sometime later this year.” Emefiele noted that in spite of the reduction in import bills, a lot remained to be done in the agriculture and manufacturing sectors. He said: “For one, our import bill may have fallen but our manufacturing and agriculture sectors still have a long way to go, if we must attain self-sufficiency in those sectors. “We must not be quick to discard the restrictive measures, which aided our recovery simply because the metrics have improved.” He assured that the CBN would continue to fine-tune its policies and strategies based on our understanding of evolving developments and supported by in-house technical analysis and simulations. Emefiele said: “We will remain proactive in ensuring that the welfare of Nigerians is optimised at any point in time. “In Monetary and Exchange Rate Policy, we have signalled from the last Monetary Policy Committee, MPC, that we will sustain the tight policies that have helped rein-in inflationary pressures. That is the reason we kept the Monetary Policy Rate, MPR, at 14 per cent. “We will also continue the transparency and even-handedness that have attracted inflows of FX into the country while keeping FX supply to the market adequate. “As we entrench and sustain the transparency in the FX market, as FX reserves accretion continues, and market confidence and improved sentiments remain, we expect that the exchange rate will not only be stable but would begin to appreciate against major currencies. “The adverse competitiveness outcome, which such appreciation may entail, would be adequately mitigated by proactive policies to ensure that our balance of payments position is not undermined.” The CBN boss called for a re-doubling of strong policy coordination, collaboration and cooperation which flourished during the very difficult times.
Share
Facebook
Twitter
WhatsApp
Pinterest
Linkedin
ReddIt
Email
Print
Tumblr
Telegram
Mix
VK
Digg
LINE
Viber
Naver
Previous article1,300 Chinese goods US proposes tariffs
Next articleShell paid N1.5trn to FG in 2017