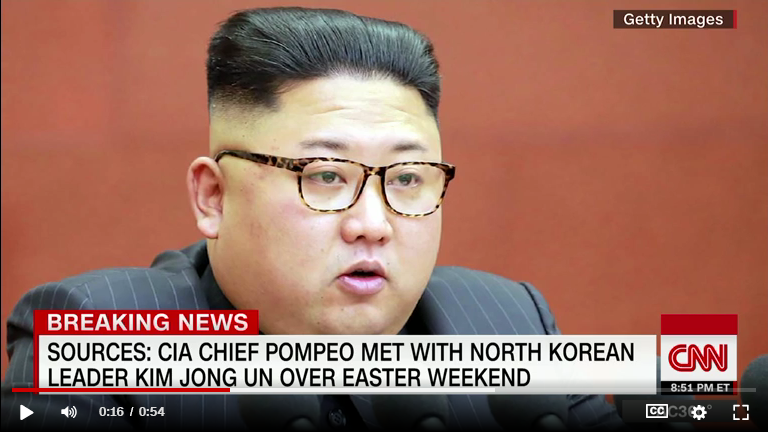 Pompeo, who is US President Donald Trump’s nominee for Secretary of State, didn’t take any officials from the White House or State Department with him on the trip, only intelligence officials, one source said Tuesday.
The White House declined to comment on Pompeo’s visit, which took place around April 1 and was first reported by The Washington Post. The Post reported that Pompeo went as Trump’s envoy to lay the groundwork for direct talks between Trump and Kim about North Korea’s nuclear weapons program.
The two leaders are set to meet in late May or early June, in what would be the first face-to-face encounter between a sitting US President and a North Korean leader.
After ordering a barrage of missile tests last year, which antagonized the international community, Kim has started engaging in diplomatic efforts over his nuclear program.
He’s due to meet South Korean President Moon Jae-In next Friday at the demilitarized zone between the two countries. Of Pompeo’s visit, a spokesman for the South Korean President’s office said it was “inappropriate” for the government to comment. 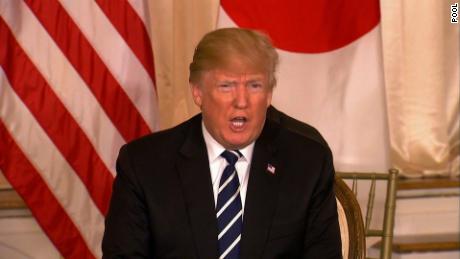 Trump: We are talking directly to North Korea 00:37

Earlier Tuesday, Trump dropped hints about top level talks between the US and North Korea during a joint press conference with Japanese Prime Minister Shinzo Abe late Tuesday.
As both leaders faced the press at the President’s Mar-a-Lago resort in Florida, Trump said “very high levels” of discussion between Washington and Pyongyang are already underway.
“We have had direct talks,” the President said. The White House later clarified Trump’s comments to make it clear he has not yet talked directly with Kim.
An administration official familiar with Pompeo’s encounter with Kim told CNN the North Korean leader had been “personable and well prepared” for the meeting, which took place but added there was a sticking point over the location of his meeting with Trump.
Speaking to reporters on Tuesday, Trump said five locations were being considered for the historic summit but didn’t elaborate on what they might be.
In the past few weeks, US officials have floated several possible venues including: the Mongolian capital Ulaanbaatar; the demilitarized zone between North and South Korea; a neutral European capital like Stockholm or Geneva; a location at sea like Jeju island or a ship; Southeast Asia, including possibly Singapore or Malaysia; the South Korean capital Seoul; or the North Korean capital Pyongyang.

Tensions on the Korean Peninsula soared in 2017 amid rapid progress in North Korea’s missile and nuclear programs, culminating in announcement by Pyongyang they now had the capacity for a nuclear strike on the United States mainland.
But relations have warmed in recent months, including a trip by North Korean athletes to the Winter Olympics, as part of a diplomatic push by South Korean President Moon Jae-in.
The same weekend Pompeo was in Pyongyang, Kim was pictured clapping and waving during a K-pop concert in the North Korean capital, held as a symbol of good will with South Korea.
Moon is due to meet with Kim in the demilitarized zone which divides Korea on April 27, the first meeting between the two countries’ leaders in a decade.
It will also be the first time a North Korean leader has set foot in South Korea since the armistice between the two countries in 1953, Moon’s Chief of Staff Im Jong-seok said Tuesady.
The South Korean leader has been a long-time proponent of peace on the Korean peninsula and is widely viewed as the main driver of diplomatic talks between North Korea, South Korea and the United States.
In March, South Korean diplomats traveled to Washington to bring a message from Kim to Trump, inviting the US President to talks with the North Korean leader, which he quickly accepted.

The CIA director’s trip to North Korea came amid a major shakeup in the Trump administration.
The US President fired Rex Tillerson as secretary of state in mid-March and nominated Pompeo to replace him as the US’ top diplomat, shortly after the White House announced the President had agreed to meet with Kim. 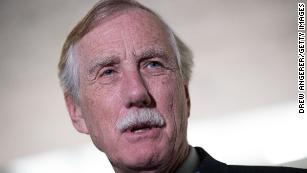 King ‘undecided’ on Pompeo for secretary of state
Pompeo will need approval from the US Senate before he takes the role, but opposition has been growing on the committee voting to confirm him.
On Tuesday, Senator Jeanne Shaheen, member of the Senate Foreign Relations Committee, said she had she couldn’t support Pompeo’s nomination.
“I continue to have deep concerns regarding Mr. Pompeo’s past statements and policy views, particularly in regards to the LGBTQ community, American Muslims and women’s reproductive rights,” she said in a statement.
US Republicans have made it clear they will bring Pompeo’s nomination to a vote in the senate regardless of the committee’s findings, which would be unprecedented in the body’s history.
Share
Facebook
Twitter
WhatsApp
Pinterest
Linkedin
ReddIt
Email
Print
Tumblr
Telegram
Mix
VK
Digg
LINE
Viber
Naver
Previous articleGay Kenyan man proposes to his boyfriend (photos)
Next articleHave rethink on law against same sex marriage, PM May tells Nigeria, others