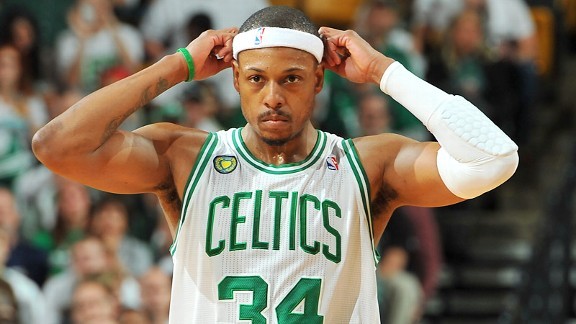 BOSTON — The Boston Celtics announced today that they will retire Paul Pierce’s No. 34 after a mid-season game against the Cleveland Cavaliers on Sunday, Feb. 11, cementing his 15-year Celtics legacy which includes countless accolades, significant milestones, and the 2008 NBA Championship.

“We teamed up with Paul from the beginning of our ownership and grew to be champions together,” said Celtics Co-Owner and Governing Partner Wyc Grousbeck. “He’s a great person and a great Celtic.”

Ten other Celtics players donned the number 34 prior to Pierce getting drafted by the team with the 10th overall pick in the 1998 draft. Now, after witnessing Pierce’s name skyrocket up a majority of the franchise’s historic leaderboards during his time in Boston, the 17-time NBA champions are raising his number among the other Celtics legends and champions.

“I will always be grateful for the sacrifices Paul made to help the Celtics be great,” said Celtics President of Basketball Operations Danny Ainge. “His love for the game was contagious and his talents and hard work were legendary. He was one of the greatest players of his era.”

“The moment I was drafted by the Celtics, I knew I was joining one of the most historic organizations in the NBA,” said Pierce. “For 15 years, I played at the Garden, looking up at the jerseys of some of the most iconic players in the game – Russell, Bird, and Cousy. To now be recognized alongside those names is such an honor. I have always said I would be a Celtic for life, and now it is really coming true.”

Pierce’s No. 34 will be ceremoniously lifted to the rafters of TD Garden less than 10 years after he helped raise the Celtics’ 17th championship banner up to the very same ceiling in 2008. Going head-to-head with the rival Los Angeles Lakers in his first career NBA Finals appearance, Pierce followed up a 22-point performance in a Game 1 victory with 28 more points on 9-of-16 shooting (4-4 3-PT) and eight assists in Boston’s Game 2 triumph. His 38 points in Game 5 of those Finals represented his second-highest scoring total in 26 postseason games that year.

“Paul was a transcendent player, a great leader, and wonderful teammate; simply one of the great Celtics in every way,” said Celtics Co-Owner Steve Pagliuca. “His number in the rafters will forever remind us of the joy he brought to the game of basketball and his love for the fans and the city of Boston.”

While his role in the 2008 NBA Finals will forever be remembered as a key part of his Celtics legacy, it was a performance earlier that postseason that is widely remembered as one of his more iconic moments in green and white. Battling the Cavaliers in a decisive Game 7 of the Eastern Conference Semifinals, Pierce and LeBron James battled head-to-head in a back-and-forth scoring affair that saw both stars score over 40 points. The Celtics captain unloaded for a team-high 41 points (13-23 FG, 4-6 3-PT) to upend Cleveland, 97-92, and advance to the Eastern Conference Finals.

Pierce’s No. 34, which was also retired collegiately at the University of Kansas on Jan. 25, 2003, will represent the 22nd retired number in Celtics franchise history. He becomes the first Celtic to have his number retired since Cedric Maxwell’s No. 31 was retired on Dec. 15, 2003.