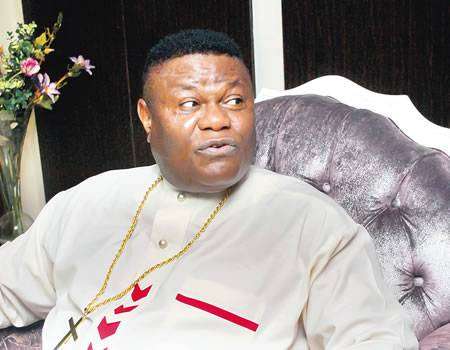 The prominent Nigerian preacher says he does not support the first fruit practice.

Mike Okonkwo, the presiding bishop of The Redeemed Evangelical Mission (TREM) is weighing on the popular first fruit practice.

Members of Pentecostal churches are usually taught to give either their first earnings or all of their first salaries at the beginning of the year.

Bishop Okonkwo is seen discussing this practice in a new video. In it, he confesses that he has been asked to enforce the payment of first fruit in his church.

However, he reveals that he does not support the popular practice.

In his words, “Can you imagine all the businessmen, all the profit you made and you bring them to my feet. Even if I did not read it in the Bible, my conscience will not allow me.

“It is not all the gifts you take, take only the one you will be able to go to bed.”

This is his second confession in recent times. The first was about the tactics used by his colleagues  to frighten church members to pay tithe.

In January 2018, this offering became the subject of debate after Daddy Freeze shared his thoughts on the issue.

He referred to this practice as a foolish and sinful one, encouraging Christians to stop giving their first fruit to pastors.

According to the OAP, “Collecting the salaries of your congregation in January is Fraud! Stop this unchristian practice that creates slavery and poverty.”

Pastors from Nigeria and other parts of the world also weighed in.