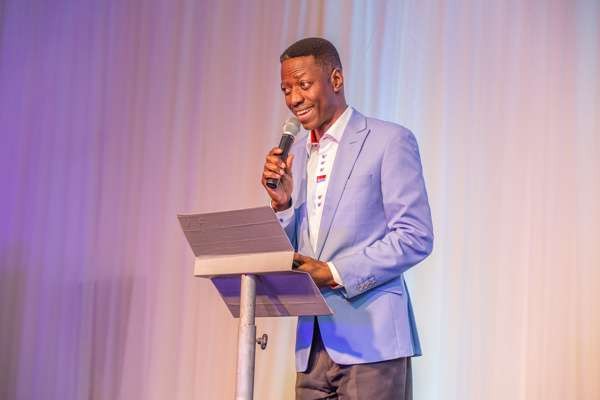 Sam Adeyemi Everything you need to know about Daystar senior Pastor

We look at the life and ministry of the well known Man of God.

Sam Adeyemi is the senior pastor of Daystar Christian Centre.

He has made a name for himself with his touching messages and lately, his unique take on tithing.

Here is everything you need to know about him.

He was born as Samuel Adesanya Adeyemi on February 3rd, 1967 in Yagba, Kogi state. His father is Chief SB Adeyemi.

He has a younger brother named Victor, who is also a pastor.

Years later, he became a pastor in Rhema Chapel with Victor, his younger brother in Kwara state.

In 2005, he was made the Director of Pastoral Care by the head of the church, Rev. George Adegboye. He was later made  Minister in Charge before he was posted to Lagos state.

Eventually, he started his church, which is committed to “raising role models.” It began on November 18, 1995 at the Eko Chinese hotel on Allen Avenue, Ikeja, Lagos.

The beginning of his ministry was filled with lots of ups and downs before it became what is known as today.

Now, Pastor Adeyemi’s ministry goes beyond the church as he is also a best selling author, host of the motivational program called ‘Success Power,’ President of Success Power International, an NGO, and head of Daystar Leadership Academy.

His mentor is Bishop David Oyedepo of the Living Faith church, also known as Winner’s Chapel.

Pastor Adeyemi is married to Pastor Mrs. Adenike. They met while he was a pastor at Rhema church.

At the time, she says it was not love at first sight. In her words, “I really did not have much feeling for him, but as time went on I heard God tell me that he was the man for me.”

It was a different story for Pastor Adeyemi, who says, “My heart did not deceive me when it exclaimed, “This is the kind of a girl one should marry,” the first day I chatted with you. I sure understand how Adam felt the first time he sighted Eve. I followed my heart and the rest, as they say, is history.”

Like her husband, she is in charge of many organizations including ‘The Real Woman Foundation’ founded in 2001.

Their union is blessed with three lovely children.