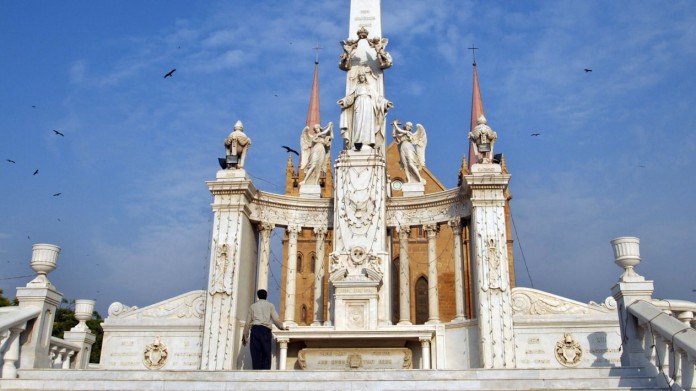 St George’s Cross billows above the castellated twin towers of the Cathedral Church of the Resurrection. Inside, beams of light pour through stained-glass windows onto choir stalls and memorial plaques engraved with names like Sir Alexander Hutchinson Lawrence.
This Anglican church could easily have been built in an English shire. But it stands at the traffic-choked center of the Pakistani city of Lahore, sharing a skyline with Mughal-era domes and minarets.
The Sacret Heart Cathedral in Lahore, designed by Belgian architect Edouard Dobbeleers. Credit: Isambard Wilkinson
“We have faced many problems over the years,” said the dean of Lahore, Shahid Mehraj, during a tour of the building. “But the flag of St George is still flying. We are still here.”
Although more than 95% of Pakistanis are Muslim, a reported 1.6% of the country’s 208-million population is Christian.
Most are descended from low-caste Hindus who converted in the 19th century, when many of the country’s hundred or so British colonial-era churches were built.
From the mountains of Malakand — home to what was once British India’s northernmost church — to the southern seaport of Karachi, Pakistan has numerous examples of outstanding Christian architecture.
The Sacret Heart Cathedral is praised for its interior and is jammed with worshippers on Sundays. Credit: Isambard Wilkinson

Relics of a colonial past

Among them, Lahore’s Cathedral Church of the Resurrection is deemed by many architecture experts to be the finest. Constructed by the British, the cathedral was consecrated in 1887 and inherited by the city’s Anglican community after the creation of Pakistan 60 years later.
The cathedral was designed by architect John Oldrid Scott in a style known as Early English — a medieval Gothic aesthetic characterized by pointed arches, vaults and buttresses, that enjoyed a revival in the 19th century.
Built in the shape of a cross, the pink-brick-and-sandstone church soars above Mall Road, the city’s main thoroughfare. Its cool, dark interior, capped with a tall vaulted ceiling, offers sanctuary from Punjab’s battering heat.
Inside the bell tower of Cathedral Church of Lahore. Credit: Isambard Wilkinson
Judged by some architecture critics to be almost a pastiche of the Early English style, the church features mellow stained-glass windows and a lavish golden altar, giving it the soaring serenity of an English provincial cathedral. The structure is beautifully rounded off with a semi-circular ambulatory, illuminated by colored trefoil windows with the deep richness of the medieval designs they mimic.
Among the cathedral’s many treasures are carvings, bells, chapels and memorials to long-dead dignitaries of the British Raj. But while the building has been dubbed “the greatest shrine to the Raj in its heroic age” by Jan Morris, an acclaimed writer on British-Indian architecture, it is more than a grand imperial reliquary.
This Cathedral is very much a living church. Sunday services are packed and Mehraj receives a steady stream of parishioners seeking his guidance.
The cathedral school is also fully attended. Pakistan’s Christian schools, which have educated much of the country’s leadership, have an excellent reputation, and most of the school’s pupils are in fact Muslim.
Mehraj said that the standard of education here reflects the building’s ethos, which he sees as one of “no compromise.”
Children attend school at the Cathedral Church in Lahore. Credit: Isambard Wilkinson
“The design of the building made no compromises to local conditions, except perhaps in using red brick instead of stone, which was a question of what was available locally,” Mehraj said. “Even with the renovations we have carried out — such as to the leaking roof, which was finished in 2008 — there was no compromise to the original spirit of the design.”
By contrast the writer and former Lahore resident, Rudyard Kipling, thought British buildings’ lack of compromise reflected the colonists’ apartness — an architectural “shut-upness,” as opposed to Eastern “spaciousness,” as he put it.

An interior shot of St Patrick’s Catholic cathedral in Karachi. Credit: Isambard Wilkinson
St Patrick’s Roman Catholic cathedral in Karachi also sequesters a vibrant congregation. Made from local stone and erected in 1881 on the site of a chapel built for the Irish Catholic troops who conquered Sindh province, St Patrick’s is all spires and high lancet windows.
But its design is far more dominating and proportionally solid than the aforementioned cathedral in Lahore.
Built in the high Gothic style, the church’s construction echoed the growing importance of Catholics — many of whom came from the former Portuguese colony of Goa to work on the newly arrived railway — in Pakistan’s Christian community, according to Karachi architect and heritage expert Yasmin Lari.
The building’s imposing facade is utilitarian but its interior is rich with vaulting, stained-glass windows, marble paving and life-size statues that give it “color and beauty,” Lari said.
1/14
St Patrick’s Cathedral in Karachi was erected in 1881 and is made using local stone. Credit: Zahra Jamshed
“The design was obviously inspired by the cathedrals of medieval England,” she added. “Its tri-pointed arched windows follow the pattern of those in Ely Cathedral (Cambridgeshire) and the twin spires appear simplified versions of those in Lichfield Cathedral (Staffordshire).”
The parish priest Father Mario Rodrigues, whose family originally came from Goa, said that on Good Fridays, up to 8,000 people attend a service held outside in the church’s large precinct.
The Irish may have left, but St Patrick’s Day is still celebrated with gusto, he added.
“Some people dress in green,” he said. “But no one drinks Guinness. We celebrate by flying kites and eating biryani.”
However, as with other churches in Pakistan, the threat of violence hangs over the cathedral. In recent decades, Christians — and by extension, churches — have become the target of Islamist-inspired mob violence and deadly militant attacks. In 1998, a bomb exploded under a pew at St Patrick’s, injuring a woman and causing minor damage to the building.

Just across the city from St Patrick’s at the Holy Trinity Cathedral, a heavy security barrier now stands beneath the church’s tall square tower. A bomb blast in 2004 buckled a 130-year-old stained-glass window, which is now held together with sticky tape, according to the Anglican church’s accountant, Robert Josiah.
“We have faced no recent terrorist threat, thank God,” he added.
Interior of the Holy Trinity Cathedral in Karachi. Credit: Isambard Wilkinson
Consecrated in 1855, Holy Trinity was built as a garrison church. Its tower, once five-stories high, was likened to a giraffe by a 19th-century observer — and disparaged as “a grotesque campanile” by Jan Morris.
“It used to serve as a lighthouse signaling to ships coming into harbor,” said Josiah. “But the top floors vibrated in the wind, so in 1904 they knocked down two levels.”
Set in gardens bordered with privet hedges and rose beds, the church is entered via an elegantly carved Romanesque arch. Inside, on the walls of its somber nave, memorials commemorate colonial-era soldiers and officials.
But time has taken its toll. The cathedral’s tiled and pitched roof suffered serious termite damage and was replaced with a concrete barrel vault in the 1970s.
Pakistan’s other cathedrals have also suffered losses. While St Patrick’s was able to restore its stained glass windows (the work was part-funded by the same German company that produced them in 1900), Lahore’s Cathedral Church of the Resurrection has so far failed to find a comprehensive way of rescuing its own damaged windows.
Pakistani Christians gather after attending a Christmas mass outside the Sacred Heart Cathedral Church in Lahore. Credit: ARIF ALI/AFP/AFP/Getty Images
Lahore’s other great church, Sacred Heart Cathedral, faces similar challenges. Designed by Belgian architect Edouard Dobbeleers, and notable for its massive Roman Byzantine dome and 165-foot high belfry steeple, the cathedral’s luminous interior is jammed with worshippers on Sundays.
But in 2008, its outbuildings were damaged in a bomb attack on a nearby police station. The bishop’s residence was weakened by the blast and has since been demolished. Although not targeted at Christians, the attack brought home the risks the community faces.
“We are always on red alert,” said Father Inayat Bernard, the cathedral’s rector. “On Sundays we cannot say mass without the shadow of security guards’ guns.”
Yet, these historic churches can play a key role in promoting interfaith harmony, said Mehraj.
“At our school we have Islamic studies. And a Muslim girl recently topped her class in Bible studies,” he said. “The light of education is to understand yourself and others.”
“Look at the architecture of the high altar,” he added. “It is shaped like a pair of open hands, welcoming everyone.”