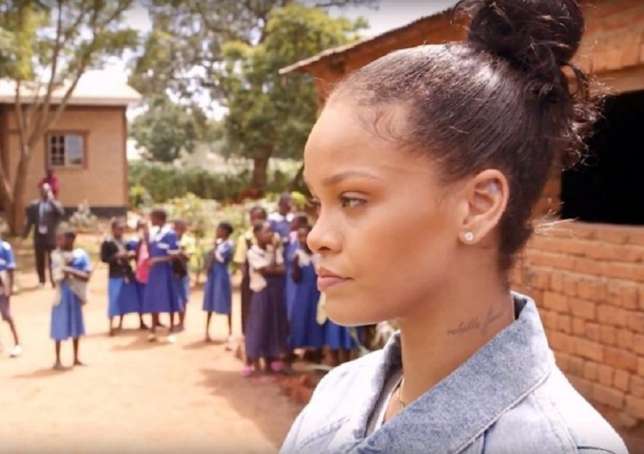 Rihanna was accused of being in the Illuminati. The group has also attacked a Senegalese musician in the past.

We all know it’s really hard not to love Rihanna, but in Senegal, there’s a religious movement named “No to Free Masonry and Homosexuality”, and one of its most important crusades this year involved getting rid of the Bajan musician.

A few months ago, Rihanna made a somewhat unexpected visit to Senegal where she was to meet the country’s President, Macky Sall and France’s Emmanuel Macron to discuss the advancement of children’s education.

Rihanna was accused of membership of the Illuminati and threatened with protests and civil action to disrupt her visit.

Nonetheless, she visited and participated in scheduled events without incident.

play Most of the members of the group are Muslims. (Daily Sabah)

The “No to Free Masonry and Homosexuality” collective is made up of 30 religious groups, together they are enjoying a growing influence in Senegal.

Senegal is a country known for a tradition of tolerance and hospitality. The country operates on a balance between Christians, Muslims and practitioners of traditional religions.

The organisations that make up this collective are predominantly Muslim, and while their ideas and views seem very absurd, they represent a small, yet very prominent part of the local population.

According to Hamidou Anne, a PhD student of Political Science at the Gaston Berger University of Saint Louis, Senegal, the group is made up of Imams, NGOs and other individuals, with a Muslim perspective to things.

“They claim to defend “good moral values,” which is an umbrella term but is able to bring together people from different backgrounds”, Anne told OkayAfrica.

The group’s following has been influenced by its vague canopy of ideals, as well as the support of prominent political forces and a growing culture of non-opposition and silence when it raises its voice.

While Rihanna was in the country, very few media platforms opposed the hoopla, the case made by the group or the methods it adopted to make its point known.

The group advocates for a puritan identity, according to Anne. In the past, it attacked Senegalese singer, Deesse Major for a dress it deemed too sexy, causing her to be detained.

Where does it go from here?

Nigerians may understand why groups like these are dangerous in the long term.

While their actions may seem pretty harmless in the short distance, they often belie a propensity to spiral into something far more militant and extreme in the future.

The danger mostly lies in their puritan approach and the influence of religious doctrine, which is often misinterpreted when the urgency of achieving their goals is amplified.

Today’s world demands that individuals and groups of various orientations live with a certain degree of tolerance.

Groups like this attempt to defeat that ideal. When these groups struggle to exert or achieve the influence that they seek, it is not uncommon for them to resort to more violent and militant methods.

The ensuing insecurity is often difficult to eliminate as quickly as it begins.

A very familiar example is Boko Haram which began as a religious cult before it denigrated into a terrorist group with tens of thousands killed by its militants.

While the potential for such is present in this anti-masonic collective, it is difficult to give an answer because they are quite small and diffuse in society.

The onus then falls on the government to sensitize, oppose misinformation, reduce risk factors like unemployment that fuelled the Boko Haram situation and nip any violent tendencies in the bud.