Wowplus
Home World News Bishop David Oyedepo says he got a letter from herdsmen saying there... 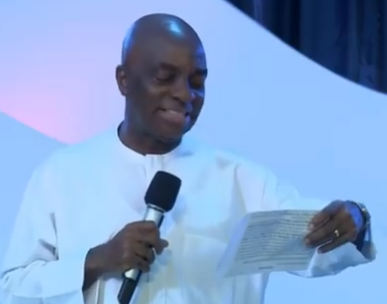 The video shared by The Sun, shows the senior pastor of the Living Faith Church aka Winners Chapel, speaking on the herdsmen issue. According to him, he received a communique from a group known as the Fulani Nationality Movement saying God has given them the land Nigeria and that there will be no peace unless the cattle colonies are established.

”just last night I got this believe from the Fulani Nationality Movement saying that God has given them this land and that they have the right to live anywhere, and until the colony is established, there’ll be no rest in Nigeria” he said

LIB cannot verify if this video is a recent one…

Watch the video below

Governor Okorocha astonished as he watched women dance topless at the 2017 Calabar Carnival
‘Dear President Buhari, It is shameful that those like me who supported you have become butts of jokes everywhere we go’ – Dele Momodu writes
Breaking! Atiku Abubakar formally rejoins PDP (video)
‘I sleep with 10 women everyday’ – Ghanaian lesbian who has converted over 3,000 women into lesbianism brags (Video)
LoLa Monroe Prepares to Make a Comeback and La’Myia Good Talks to Eric Bellinger About Getting a Breast Enhancement
Boko Haram Abducted Chibok girls say ‘we won’t return’ in latest video
4 boys gang rape a JSS2 female student in Ghana and they film it and share online
Reno Omokri replies Presidency over claims that 756 people were killed by herdsmen during Jonathan’s tenure
Ibrahim Idris Police IG donates food items to orphanage in Lagos
Mass burial for 73 Benue herdsmen attack victims to hold today
In Benue Anti-grazing law must be modified for killings to stop – Cattle Breeders
“We attacked Benue communities because the residents attacked and stole our cows”-Miyetti Allah cattle breeders say
Airboy Ft. Burna Boy – Ayepo (Remix)
18 Year Old Girl Auctions Her Virginity Online To Buy Her Parents A House Gets £890,000 Offer
“Smart Speakers” The Next Big Thing
In Yola Police arrest 200 cows for invasion of farm He also commended the herdsmen for accepting responsibility for the destruction by their cattle and their commitment to pay for the damages.
Video: Nicki Minaj grabs and licks her breasts while posing for a magazine shoot