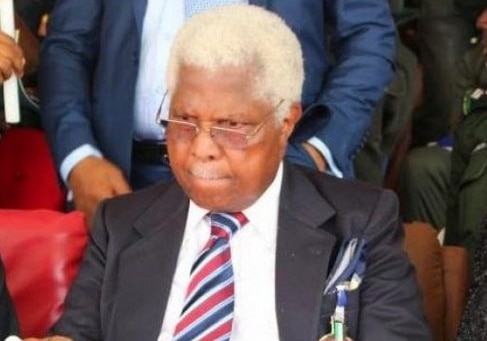 Prof. Uche Isiugo-Abamihe, the Vice Chancellor, St. Paul University, said in his tribute that Ekwueme’s demise was a huge loss to the university community.

The News Agency of Nigeria (NAN) reports that the late Ekwueme had been the Board of Trustees Chairman of the St. Paul University since its inception in 2009 and chancellor of EBSU until his death,

Prof. Uche Isiugo-Abamihe, the Vice Chancellor, St. Paul University, said in his tribute that Ekwueme’s demise was a huge loss to the university community.

The vice chancellor noted that Ekwueme had undertaken major capital projects in the university, ensuring that it met all requirements that would facilitate securing full accreditation by the Nigeria Universities Commission (NUC).

Isiugo-Abamihe described Ekwueme as “irreplaceable and honourable chairman whose name would be written in gold in history of St. Paul university’’.

“He was a patriot, a man of courage, a father and a trail blazer,’’ the vice chancellor stated, adding that his achievements would be built upon.

Similarly, Chief Ikechukwu Abana, the Public Relations Officer of the institution, told NAN that the university had “lost a voice’’.

According to him, Ekwueme, as BOT Chairman, was attracting personalities to sustain the university.

A NAN correspondent who visited the university on Friday, reports that Prof. Chigozie Ogbu, a former Deputy Governor of Ebonyi and Acting Vice Chancellor of the university, was first to sign the condolence register opened late on Wednesday at EBSU after a management meeting.

Similarly, Prof. Francis Idike, the immediate past Vice Chancellor, and other principal officers of the institution numbering about 16 have so far paid tribute to Ekwueme.

His younger brother, Igwe Laz Ekwueme, who is also the traditional ruler of Oko in Anambra, had issued a statement announcing the former vice president’ s death.

Antonio Guterres Trump says UN boss doing ‘very very spectacular job’ US President Donald Trump jettisoned his past criticism of the United Nations Friday, as he lavished praise on the organization’s Secretary General.
Peter Obi Former Governor hails GEJ at 60, mourns Ekwueme
Pence US VP says 1983 bombing was opening salvo in ‘war on terror’ US Vice President Mike Pence described the 1983 bombing of a Marine Corps barracks in Beirut as the opening shots of the “war of terror” Monday, as he issued fresh warnings to Iran and Hezbollah.
President Buhari approves the immediate treatment of Alex Ekwueme outside the country
Pacers and Cavaliers set for battle
Osinbajo to inaugurate projects in Kwara
Atiku All the times ex VP has dumped one political party for another
Alex Ekwueme Senate urges FG to immortalise former Vice-President
Photos: Vice President Yemi Osinbajo attends wedding of the DSS official attached to him
President Paul Biya of Cameroon marks 35 years in power
Fans divided over Peter Okoye’s solo career
13-years old girl narrates how uncles took turns to rape her
Alex Ekwueme Former VP left footprints on sands of time – Ambode
Mourinho says he has no idea when Pogba will be fit
Obasanjo is boss of bosses, Jonathan Tells Atiku to reconcile with Obasanjo or forget bout 2019 presidency
Christmas budget of a Slay Queen in Nigeria.

‘The biggest duo ever in Africa’ Peter Okoye celebrates himself and his twin brother, Paul, as they turn a year older today