Louvre Abu Dhabi: Why all eyes are on the Middle East’s new billion dollar museum 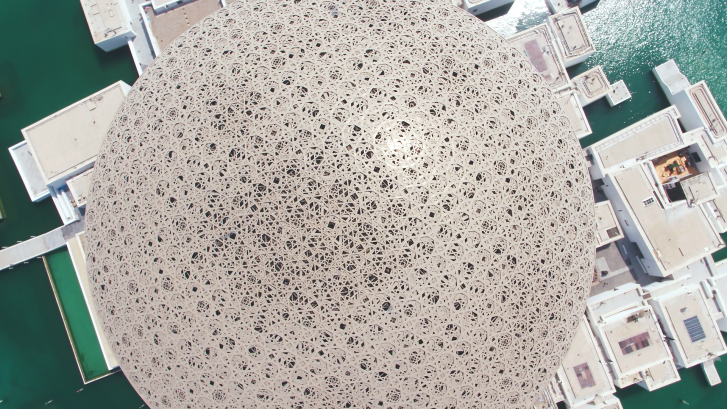 Louvre Abu Dhabi: Why all eyes are on the Middle East’s new billion dollar museum

On Saturday, the Louvre Abu Dhabi will open its doors to the public, more than 10 years after France agreed to loan the name of the Louvre to the United Arab Emirates as part of a deal with Agence France-Museums reportedly worth in excess of $1 billion.
While swipes have been made at the oil-rich nation for using its wealth to buy culture, there’s no doubt that, in terms of cultural significance, the museum is a huge milestone not just for the Middle East, but for the world. Here’s why:
Related:

The most anticipated museums opening in 2017

Yes, it’s impossible for any museum to represent every culture and period in equal measure. However, the Louvre Abu Dhabi is attempting to re-tell the story of global creativity by taking objects out of their usual departments and consolidating the history of humanity in one continuous flow. It’s certainly a commendable goal for our globalized era.
View of the Louvre Abu Dhabi from above.

It’s a feat of engineering ingenuity

The stats about this museum, designed by Pritzker Prize-winning architect Jean Nouvel, will make your head spin. A total of 7850 aluminum stars went into making its dome, which is 180 meters (591 feet) in diameter and weighs over 7700 tons — and that’s just the roof.
The museum was constructed on a dry dock made from 503,000 cubic meters of sand. Later, the pools surrounding the museum were filled with water to great effect.
The Louvre Abu Dhabi is also equipped with its own marina for private yachts to dock, and a jetty for Abu Dhabi Ports’ soon-to-be-launched the water taxi service.

The last 10 years have been a spending spree for the Abu Dhabi Tourism & Culture Authority as they’ve built up the museum’s permanent collection, which now boasts a well-preserved Bactrian princess sculpture from Central Asia, a 9th-century Quran in Kufic script, and the beautiful “Madonna and Child” by Giovanni Bellini, a vital but often overlooked Renaissance artist.
However, the agreement with France means the museum has borrowed a number of masterpieces from 13 French institutions, too. Highlights include Leonardo da Vinci’s “La Belle Ferronniere,” one of only 15 known paintings by the artist, as well as an 1887 Van Gogh self-portrait and “The Saint-Lazare Station” by Claude Monet.
“Madonna and Child” (between 1480 and 1485) by Giovanni Bellini Credit: Louvre Abu Dhabi / Thierry Ollivier

…and will feature new commissions too

The museum’s primary focus is ancient artwork and objects, but there are new works by living artists in the open area between exhibition halls. American neo-conceptualist Jenny Holzer has contributed a piece consisting of three stone walls engraved with historic texts; and Italian sculptor Giuseppe Penone’s “Leaves of Light,” a bronze cast of a wild cherry tree fitted with mirrors in its branches, was designed to capture and reflect the light generated by the museum’s canopy.

It could enhance the market

The Middle Eastern art market has an appetite for contemporary and 20th-century pieces, but not much else beyond that. Having an institution of this calibre on the doorstep will allow collectors and enthusiasts to gain a deeper understanding of art history; and the credibility it lends the region could have a positive impact for both buyers and sellers.
Funeral set of princess Henuttawy, cartonnage Egypt (2nd half of 10th century BCE-beginning of the 22th dynasty Credit: Louvre Abu Dhabi / Thierry Ollivier

Schools and universities are popping up year on year all over the country, and several highly acclaimed international institutions have opened outposts in the Gulf, offering world-class cultural educations. New York University’s Abu Dhabi campus, for example, offers art history courses; and both the Paris-Sorbonne University and the Emirates’ own Zayed University offer museum studies programs. The new Louvre Abu Dhabi presents a potential new home for budding art academics after graduation.

It will house a research center

The Louvre Abu Dhabi will have a dedicated center that offers a place for scholars to learn more about the collection. As many of the pieces in the museum will not have been exhibited in the context of international history before, the Louvre Abu Dhabi could well be the spark that triggers new ways of thinking.

…and a dedicated children’s museum

In the central space under the dome, the Louvre Abu Dhabi Children’s Museum is an educational and engaging space for visitors aged six to 12. There will be temporary exhibitions specifically tailored to children (the first explores shapes and colors through 6th-century Turkish ceramics, 18th-century French vases and a 19th-century painting by Swiss-German artist Paul Klee) as well as interactive displays children can touch.
Melania Trump donates her inaugural gown to the Smithsonian’s National Museum of American History