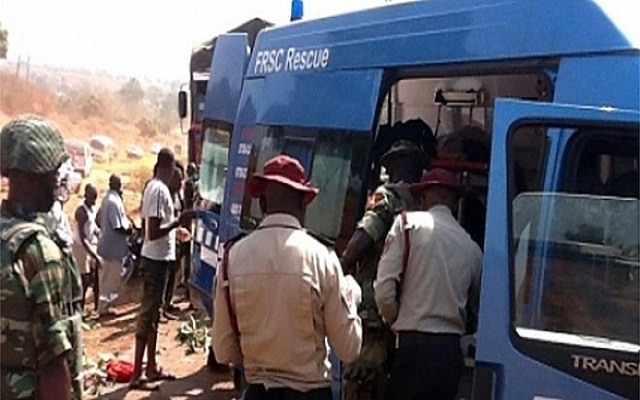 The Federal Road Safety Corps (FRSC) in Ogun said two persons died while four were injured in an accident on the Sagamu-Benin expressway on Monday.

The Ijebu-Ode Unit Commander of the FRSC, Mr Richard Adetoro, speaking with newsmen blamed the crash on impatience on the side of the driver.

Adetoro said that a Toyota Hiace bus registered as ENU 727 XN coming from Lagos and heading to the East rammed into a moving Mercedes Benz 114 truck, registered; Lagos MUS 727 XN.

The crash, which he said was due to over speeding, resulted into the death of the two persons while four sustained injuries.

‘‘For reasons best known to the commercial bus driver, he violated road traffic regulations by leaving his side of the road to face incoming traffic.

‘‘He was speeding and crashed headlong with the truck around the J3 area leaving two dead and four injured.

‘‘Of the 15 passengers, only three were lucky to escape unhurt. The remains of the dead have been deposited at the Ijebu-Ode General Hospital.

‘‘The injured passengers have been taken to a private hospital for treatment and the wreckages of the crash have been towed to the Ogbere Police Station to free vehicular movement,” Adetoro said.