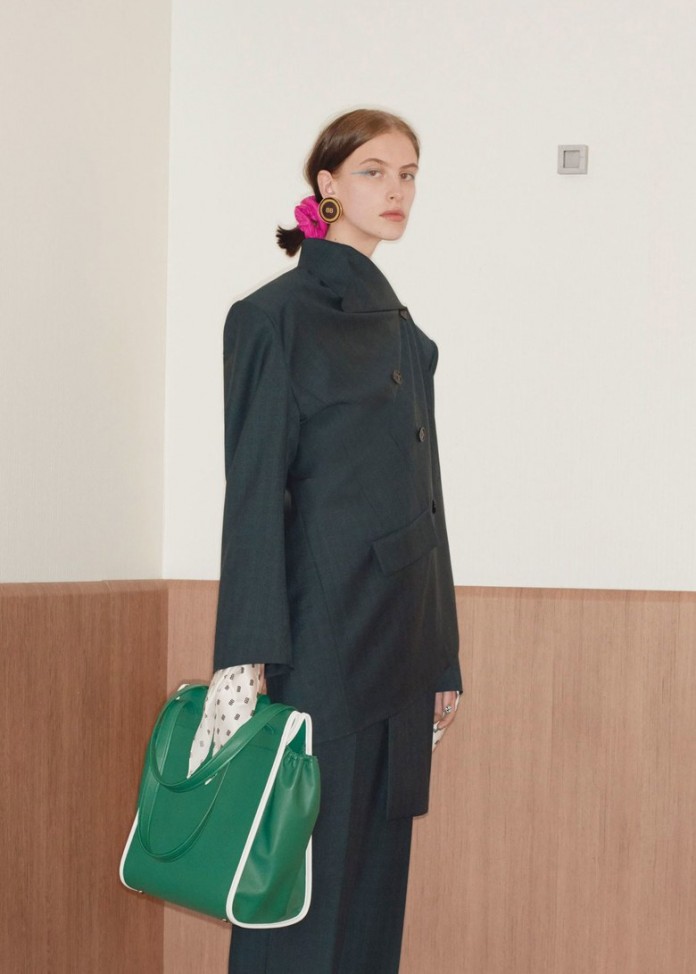 Is a $195 scrunchie worth it? Well, that’s how much the thick hair band from Balenciaga’s Resort 2018 collection costs—shipping not included. Its steep price tag is comparable to that of a Vetements hoodie, which comes at a whopping $885—a triple-digit number that could also get you a 1999 Lincoln Town Car with 300,000 miles on it, or nearly 90 “Blue Light Special” hoodies at $10 a pop.

Lately, talking about ordinary items with extraordinary price tags has begun to feel a bit like Passover seder, where the first question at the table is: “Why is this night different than other nights?” In fashion terms that translates to: “Why is this item different from all other items?” In the case of this particular electric-blue Balenciaga scrunchie, it is indeed a bit better than its standard drugstore counterpart. Dated and cheeky, it’s packed with that relevant, delicious, bad-taste-good-taste attitude, especially since it is branded as a chouchou—a cutesy French word whose soft “chou” is a nice alternative to the hard, screeching “scr” of scrunchie. It’s also rendered in crinkly leather and stamped with the gold Balenciaga logo. Voila! Chic.

Photo: Courtesy of Net-a-porter
The hypebae scrunchie isn’t really breaking news, but part of a definitive style trend. 2017 has been the year of boring items gone viral with a few elevating factors, like clever branding. Today, my colleague pointed out that a large leather Loewe paper clip exists. Want one? Too bad: The roughly $95 knickknack is currently sold out. (Though, there is an even bigger one on greatbigstuff.com for $15!) In the same vein, there were those anointed-by-Rihanna Gucci socks with a pretty crystal monogram that cost a cool $1,340. Last week, outside of New York’s Grand Central Station, I found one of those coveted Supreme Metro cards fluttering on a sidewalk grate. I picked it up. Hell, I read about how kids were waiting in line for hours to snag one back in February. Plus, I was curious to see how much they were going for online, after I had seen that a Fall 2016 Supreme brick was fetching more than $150 on eBay. Well, newsflash: Those Supreme subway swipes are currently priced out around $15 to $20 or, according to basic math, five or six rides on the MTA.
Photo: Courtesy of Farfetch
All that is to say that shareability and shock value work hand-in-hand to determine an item’s dollar value. I first found that Balenciaga scrunchie on none other than Instagram. I had already seen it twice that day, although I think it had only been on e-commerce sites for about a week. Or was it two? The Instagram accounts were poking fun at the piece, questioning the almost $200 amount. Yet the seemingly absurd price tag is working in the scrunchie’s favor by turning heads—at least mine. Now, I just need to scrap together $195 to buy it. Maybe I’ll Instagram it, too, and spread the good word.
Photos: Former Head of State, Abdulsalam Abubakar pays courtesy visit to President Buhari
Maheeda goes topless in racy Instagram photos
Photos: South African Police arrest Nigerian man found in possession of huge stash of counterfeit money
Justin Bieber’s mother defends him on Instagram after Selena Gomez’s mother’s disapproval of their reunion
Cossy Orijakor to empower two fans with free shops for 2years after successful butt surgery
Samsung Galaxy S9 box Photo Specs Leak!
Photos: 12 killed, 50 injured in twin suicide attacks in Borno
Photo: Nigerian men arrested for illegally staying in Indonesia
Rihanna to co-host ‘Controversial’ 2018 Catholic Couture inspired edition With Anna Wintour as host, Rihanna, Amal Clooney and Donatella Versace supporting, the MET Gala 2018 theme is controversial!
‘I don’t want my daughter to play tennis’ – Serena Williams
Mercy Johnson Watch actress as she sings to her husband in bed
Sextape of Cardi B’s fiance Offset with another female leaks on Twitter
Madrid left back Marcelo in £437,000 tax charge
‘The fruit of war’: Pope Francis prints photo of Nagasaki victims
Photos: Police parade 30 deadly kidnappers, armed robbers terrorizing Okene-Lokoja-Kabba road
Controversial socialite, Pretty Mike, attends a wedding in Lagos dressed in an angelic costume(photos)
Who flew in all these curvy women? See racy photos of another Instagram model ‘attending parties’ in Nigeria
Conor McGregor wears £1,785 Gucci tracksuit for special outing with his family and friends (Photos)
Nokia 8 Launching Today: Event Time &amp; Live Stream, Price, Specifications, and More
Photos: Stunning Nigerian model leaves nothing to the imagination in a completely see-through bodysuit
Share
Facebook
Twitter
WhatsApp
Pinterest
Linkedin
ReddIt
Email
Print
Tumblr
Telegram
Mix
VK
Digg
LINE
Viber
Naver
Flip
Copy URL
Previous article
Yes, You Can Wear Sneakers to the Holiday Party—Just Ask Rihanna
Next article
Ladies, would you rock this jean? (Photo)