16 years after, lady who survived the Ikeja cantonment bomb blast shares her story

16 years after, lady who survived the Ikeja cantonment bomb blast shares her story

16 years ago, January 27, 2002 to be precise, the city of Lagos witnessed an unprecedented twin bomb blast in ikeja that left hundreds dead and many more injured.

This lady, Ifeoma was just 4 years old at the time and she survived. Back then her photograph made it to the covers of several national newspapers.

Remembering the sad day 19 years after, she wrote, ‘the past is but a story told!! and the future has been written in GOLD. Today mark’s 19 years I escaped death !! It would have been too young to die, But God changed my story (27/1/2002) during the bomb blast that happened in Ikeja cantonment, when I was just 4 years old. that took the lives of millions of souls including that of my kid brother, and left me the only surviving child among all those that were drowned on that day at the Canal .. so many lives were lost, properties on that day. 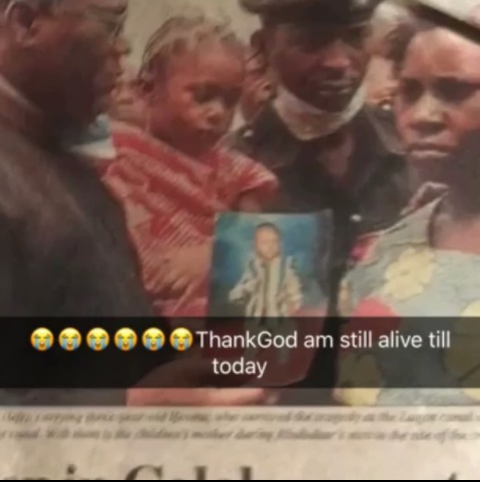 But here I am today thanking God for he has preserved me because he knows he has a grater plan for me,which I haven’t fulfilled in earth. RIP to those souls that were lost including that of my brother may God console them (even tho the government fulfill Their promises may God still touch their heart for them to remember us and fulfill their promises).