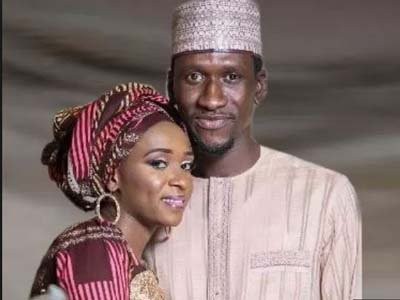 It was also alleged that bloodstains in the couple’s flat had been mopped up and murder weapon cleared by unknown persons before homicide detectives stormed the place on Sunday.

The deceased also at the last minutes went to an ATM and withdrew cash to pay for the balance of the repair of his wife’s crashed car.

But Maryam was said to have demanded for a divorce with the threat of cutting off her husband’s manhood.

These facts were contained in the testimony of a witness, Habib Gajam (aka Gidado), which was published in the Lifestyle Section of  inside are wa.com.ng

Gajam, who is a family friend, gave the graphic details of what transpired and how the embattled wife had tried to cover up the act.

Gajam said: “Today, I witnessed the most wicked and shameful display of arrogance in Bilyaminu’s death case.

“At about 9 to 10p.m. last night  (Saturday),  tension started to build between Bilyaminu  and his wife, Maryam,  at his residence.

“Maryam demanded a divorce with the threat of cutting off his manhood. Ibrahim Aliero, Bilyaminu’s friend (in whose instance the drama started) intervened four times to stop Maryam from stabbing her husband.

“Ibrahim called Auta (Maryam’s uncle) and Abba (Bilyaminu’s cousin), who had left the house moments before the drama started, to come and intervene.

“After a short calm, Maryam broke a bottle of groundnut and attempted to stab Bilyaminu, again, but this time he held both her hands and struggled to take the bottle from her, injuring himself in the process. Unrelenting and wild, she bit his finger.

“Uncle Auta had arrived this time to calm the situation. They both committed to Uncle Auta to let go of the grievances (at least for the night).

“After the situation had become calm, Bilyaminu and his friend went to the Pharmacy to get his hand treated from the bite he sustained from Maryam.

“They later went to the ATM and made a withdrawal to pay up the balance of a spare part for Maryam’s crashed car. By 11pm, Bilyaminu and Ibrahim had gone back to a calm home. Abba (Bilyaminu’s cousin) joined them in the living room.

“They stayed till almost midnight and decided to call it a night.

In the emotional piece, Gajam related the parting words of Bilyamin to his cousin and others.

He also captured attempts by the detained wife to change the story at the police station in order to cover up her crime.

The witness said: “When Bilyaminu was seeing them off, he told Ibrahim that ‘I don’t want to go back until she’s asleep’. They called it a day. Abba and Ibrahim left.

“At around 2pm Sunday afternoon, family members were summoned to Maitama Hospital, where Bilyaminu was lying in a pool of his blood with multiple stabs on his chest, shoulder, a deep cut on his inner thigh and many bite wounds on his stomach.

“Maryam had confessed to stabbing him to the hospital authorities. Maitama Police Station was the next point of call.

“At Maitama Station, where Maryam was asked to write her statement, story changed. She claimed they got involved in a fight and Bilyaminu sustained injuries from a broken Shisha pot and that she never stabbed or hit him.

“She was later taken to the FCT Command in Garki II for further investigation. The police commissioner instructed that the crime scene should be visited.”

Gajam explained: “To the amazement of Abba (Bilyaminu’s cousin) and Ibrahim (his friend), who are key witnesses in the investigation, bloodstains had been mopped up, murder weapon disappeared, but flower vases and shisha pot were broken to corroborate Maryam’s earlier statement at the station.

“In the midst of this tragedy and confusion, Maryam had the audacity and courage to change her story. More disgusting is her lack of remorse and respect for the victim’s family.

“Someone, who divorced his first wife to be with you doesn’t deserve this. #JusticeForBilyaminu shall be served by the Almighty Allah on the day of resurrection.

“May Allah grant Bilyaminu Jannah and bless the life of his eight months old daughter, Sa’adatu.”

‘Words can’t express everything I wish to say’ – 2face Idibia celebrates wife, Annie Macaulay on her birthday today
For Men 6 conversations you shouldn’t have with anyone but bae Every man who respects his partner and relationship should learn where to draw the line when conversing with other women.
Grace Mugabe The lavish former 1st lady of Zimbabwe who built a palace for herself
Tiwa Savage Singer says God saw her through the trying times of her marriageTiwa Savage Singer says God saw her through the trying times of her marriage
Lol…Who did this President Trump?
Lionel Messi Barcelona star and his wife hang out with Fabregas in London Messi and Fabregas hung out together with their partners to have lunch in London.
2face Idibia, Annie and their kids jet out to Dubai for a birthday vacation (photo)
Deaths in Kogi State over Several Months Unpaid Salaries Worker Cry Out
Check out newly released pre-wedding photos of Oritsefemi and his wife, Nabila
Director owed 11 months salaries, commits sucide in Kogi
Photos: Lagos Police Commissioner leads task force to visit Apapa-Kirikiri traffic gridlock
Morning Teaser ‘My best friend’s wife is carrying my baby’ Nnamdi is in a very serious dilemma after he got his best friend’s wife pregnant and as the baby is due, he does not know if he should confess what he did.
policeman who arrested Evans shot dead by kidnappers In Lagos
18-year-old pregnant mother-of-one and her husband reveal why they went into robbery
Mad Love Bayelsa police arrest man for butchering his wife A 24-year-old man has been arrested by the police in Bayelsa State for butchering his wife to death on suspicion of cheating.
Tyrese threatened The Rock’s daughters on social media
Juliet Ibrahim warns boyfriend If you mess me up Ghanaians will deal with you
Share
Facebook
Twitter
WhatsApp
Pinterest
Linkedin
ReddIt
Email
Print
Tumblr
Telegram
Mix
VK
Digg
LINE
Viber
Naver
Previous articleFG protests against burial of 26 Nigerian girls, women Italy
Next articleRangers commence screening of players for Team B