Wowplus
Home Communities Religion ‘VP Yemi Osinbajo’ s daughter’s fiance is not a Muslim, he is... 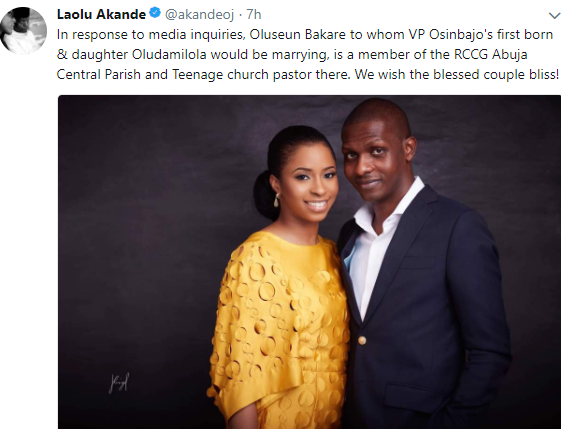 ‘VP Yemi Osinbajo’ s daughter’s fiance is not a Muslim, he is a pastor in RCCG’ – Laolu Akande

Earlier in the week there were reports that Damilola, the first child of Vice Presidnet Yemi Osinbajo’s fiance, Seun Bakare, is a Muslim.

Laolu Akande, the spokesperson of Vice President Osinbajo, took to his twitter handle today to clarify on Seun’s religion. According to Akande, Seun, who is the son of billionaire businesswoman, Bola Shagaya, is a pastor in the teenage church of RCCG in Abuja.