President Donald Trump’s tweet on Saturday about firing Michael Flynn from his position as national security adviser is garnering a lot of attention from critics — with some calling it a possible admission of obstruction of justice.

Trump tweeted about Flynn’s Friday guilty plea, in which the former national security adviser said he lied to the FBI about conversations he had with Russian Ambassador to the United States Sergey Kislyak during the transition and disclosed that he is cooperating with special counsel Robert Mueller’s office.
“I had to fire General Flynn because he lied to the Vice President and the FBI,” Trump wrote. “He has pled guilty to those lies. It is a shame because his actions during the transition were lawful. There was nothing to hide!”
The tweet immediately caught the attention of critics, who questioned whether Trump knew Flynn had lied to the FBI when the President asked then-FBI Director James Comey to let the investigation into Flynn go.
California Rep. Adam Schiff, the ranking Democrat on the House Intelligence Committee, tweeted, “If that is true, Mr. President, why did you wait so long to fire Flynn? Why did you fail to act until his lies were publicly exposed? And why did you pressure Director Comey to “let this go?”
Walter Shaub, a former director of the United States Office of Government Ethics, also responded on Twitter to Trump’s tweet, writing: “…just couldn’t resist commenting on Flynn. Are you ADMITTING you knew Flynn had lied to the FBI when you asked Comey to back off Flynn?”
Shaub later added, “Tell us, @realDonaldTrump, did you know Flynn had lied to the FBI when Counsel to the President Don McGahn snubbed Yates as she tried to warn the White House Flynn had been compromised? Did you know Flynn had lied to the FBI when you fired Yates days after her whistleblowing?”
California Democratic Rep. Ted Lieu also reacted to Trump’s tweet.
“THIS IS OBSTRUCTION OF JUSTICE,” Lieu tweeted. “@POTUS now admits he KNEW Michael Flynn lied to the FBI. Yet Trump tried to influence or stop the FBI investigation on #Flynn.”
Former senior adviser to President Barack Obama, Dan Pfeiffer‏, tweeted, “If Trump keeps admitting to obstructing justice, Ty Cobb might be right that the Mueller investigation may wrap up sooner than we think.”
Cobb is the White House special counsel overseeing the legal and media response to the Russia investigation.
An outside attorney for Trump claimed the President’s tweet “was a paraphrase” of Cobb’s statement Friday on Flynn’s guilty plea.
“The tweet was a paraphrase of Ty Cobb’s statement yesterday,” the attorney for Trump’s private legal team, John Dowd, told CNN. “I refer you to Comey’s testimony before Congress about FBI view of Flynn’s answers.”
However, Cobb’s statement on Friday does not say anything about Flynn’s lies to the FBI being a factor in his firing. That statement reads: “Today, Michael Flynn, a former National Security Advisor at the White House for 25 days during the Trump Administration, and a former Obama administration official, entered a guilty plea to a single count of making a false statement to the FBI. The false statements involved mirror the false statements to White House officials which resulted in his resignation in February of this year. Nothing about the guilty plea or the charge implicates anyone other than Mr. Flynn. The conclusion of this phase of the Special Counsel’s work demonstrates again that the Special Counsel is moving with all deliberate speed and clears the way for a prompt and reasonable conclusion.”

During his testimony to Congress in June, Comey said Trump asked him in February to drop the FBI investigation into Flynn centering on his calls with Kislyak during the transition. Flynn was dismissed as national security adviser after it emerged he had lied about the conversations to Vice President Mike Pence.
Comey wrote in his opening testimony that Trump said: “‘I hope you can see your way clear to letting this go, to letting Flynn go. He is a good guy. I hope you can let this go.”
“I replied only that ‘he is a good guy.'” Comey wrote, describing a private meeting with Trump in the Oval Office on February 14, one day after Flynn was fired; Comey then added: “I did not say I would ‘let this go.'” 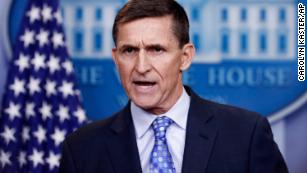 Trump on Flynn deal: ‘There has been absolutely no collusion’
In her testimony in May, former acting Attorney General Sally Yates said she alerted the White House in January that Flynn could be “essentially blackmailed by the Russians.”
“We believed that Gen. Flynn was compromised with respect to the Russians,” Yates told a Senate judiciary subcommittee in a high-profile hearing on Russia’s meddling in the US election.
Yates told the panel that she had a meeting with White House Counsel Donald McGahn on January 26 to tell him that she had information that statements by Vice President Mike Pence, based on his conversations with Flynn, were false. She was joined in the meeting by a senior career official in the Justice Department.
Trump fired Comey in May. The White House said Comey was dismissed on the recommendation of Deputy Attorney General Rod Rosenstein and Attorney General Jeff Sessions. They cited Comey’s handling of the probe into Hillary Clinton’s use of a private email server, a controversy that many believe helped Trump defeat the Democratic nominee in the 2016 presidential election. Mueller was appointed special counsel overseeing the Russia investigation days later.
Steve Vladeck, a CNN legal contributor and professor at the University of Texas Law School, said Trump’s tweet “certainly implies that, at the time the President fired then-FBI Director Comey, he knew that Flynn had committed a felony. So the question is whether he fired Comey at least in part to try to protect Flynn from prosecution for a felony of which he was already aware.”
Vladeck added: “I can’t speak to how the special counsel would view this statement, but it betrays an alarming lack of understanding of the relevant legal rules on the President’s part, or of the serious legal jeopardy he could be in for actions he may wrongly believe are appropriate.”
Earlier Saturday, Trump also said he is not worried about what Flynn might tell Mueller’s team. When asked by reporters if he was worried about what Flynn might say, Trump replied, “No, I’m not. And what has been shown is no collusion, no collusion. There has been absolutely no collusion. So we’re very happy.”
Why I withdrew Governor Obiano’s security personnel – Police IG Speaks.
Atiku All the times ex VP has dumped one political party for another
dead after California shootings; gunman tried to enter school
Pence US VP says 1983 bombing was opening salvo in ‘war on terror’ US Vice President Mike Pence described the 1983 bombing of a Marine Corps barracks in Beirut as the opening shots of the “war of terror” Monday, as he issued fresh warnings to Iran and Hezbollah.
Trump-Russia: Michael Flynn admits lying to FBI
Trump-Russia Indictments, guilty plea in probe: What we know Two former Donald Trump associates were indicted Monday and it was revealed another has pleaded guilty to lying to FBI investigators, in the first substantial legal action stemming from the probe into Russia’s US election interference.
Antonio Guterres Trump says UN boss doing ‘very very spectacular job’ US President Donald Trump jettisoned his past criticism of the United Nations Friday, as he lavished praise on the organization’s Secretary General.
A ‘very forceful’ Trump pushed Republican congressional leaders to shut down the Russia investigation
Robert Mueller Straight-shooting former FBI chief Robert Mueller, the former FBI director heading the probe into alleged collusion between the Trump election campaign and Russia, has earned a reputation of being a straight shooter who could be right out of Hollywood’s central casting.
APGA clears remaining 4 LGAs in Anambra guber poll
White House says Trump, Duterte ‘briefly’ discussed human rights but Philippine spokesman says they didn’t
Punk group attack ‘police state’ on Trump anniversary
US President to decide on North Korea terror list after Asia trip
Atiku Ex-VP could ask for Obasanjo’s help for 2019 presidential election
US to stop arming anti-IS Syrian Kurdish YPG militia – Turkey
Photos/ Videos: Two young men subjected to severe flogging for stealing turkey in Anambra
Trump’s Mar-a-Lago Thanksgiving
Ivanka Trump US President’s daughter urges India to boost women in workplace