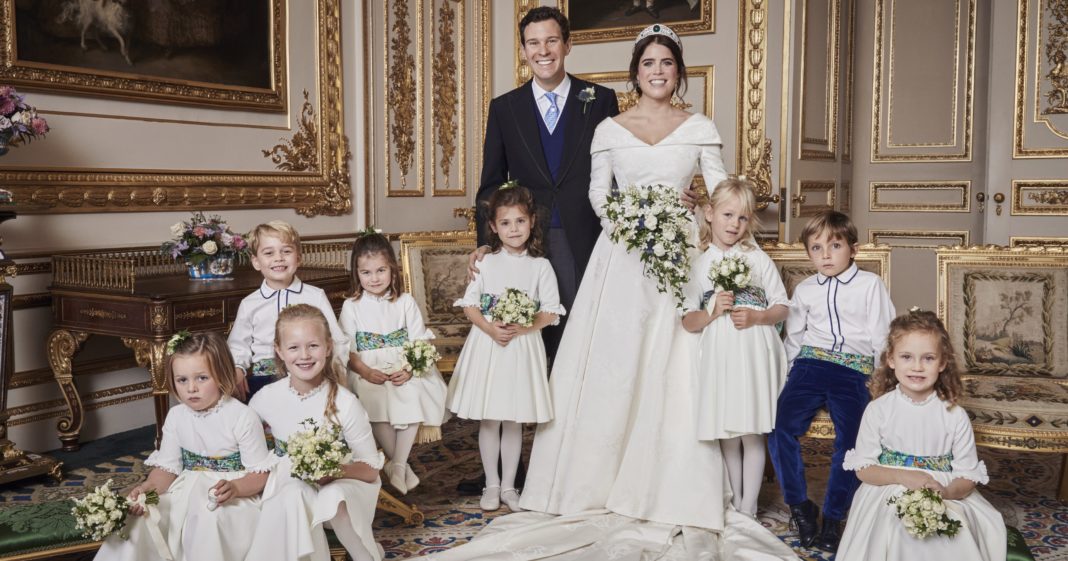 So in love. Princess Eugenie and her new husband, Jack Brooksbank, look so happy together in their official wedding portraits released on Saturday, October 13.

The four photos, taken by photographer Alex Bramall, show the couple with their family at Windsor Castle, while another photo shows Eugenie wearing a Zac Posen dress as a private dinner held at Royal Lodge. “The couple are delighted to be able to share these images of their special day,” Buckingham Palace said in a statement on Saturday.

The couple tied the knot in front of more than 800 guests at St George’s Chapel at Windsor Castle in England on Friday, October 12, nearly five months after Prince Harry and Duchess Meghan exchanged vows at the same church in May.

Eugenie, who is the youngest daughter of Prince Andrew and Sarah Ferguson, wore a long-sleeve Peter Pilotto gown that plunged in the back to show off the scar that runs down her spine from scoliosis surgery she underwent when she was 12. “I think you can change the way beauty is, and you can show people your scars and I think it’s really special to stand up for that,” Eugenie, 28, told ITV the day before the nuptials.

Prince William and Duchess Kate were in attendance as were Harry and Meghan. His exes Chelsy Davy and Cressida Bonas were also among the guests at the chapel.

The newlyweds celebrated at two receptions following the ceremony. One was hosted by Eugenie’s grandmother Queen Elizabeth II at Windsor Castle on Friday afternoon, and a second reception was held in the evening at Royal Lodge in Windsor, which Prince Andrew shares with his ex-wife.