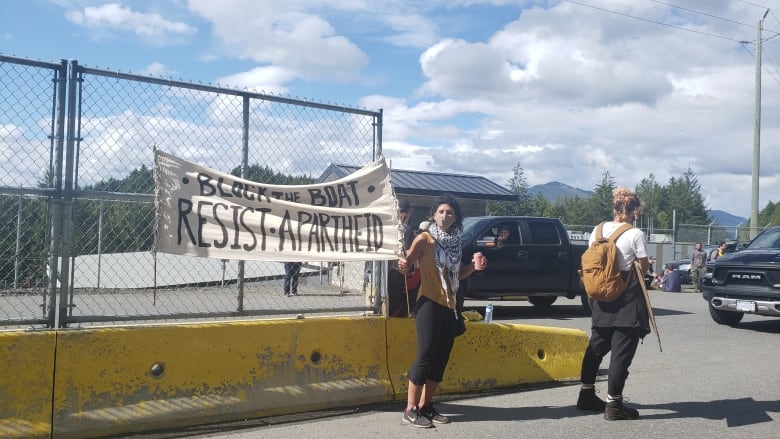 An Israeli container ship was prevented from docking Monday at the Prince Rupert, B.C., port after a group of about 10 protesters — whose aim is to block Israel from shipping goods to North America — formed a picket line at an entrance to the Fairview container terminal.

The container ship, the Volans — owned by Israeli shipping company ZIM — was anchored in Prince Rupert’s harbour for most of the day Sunday.

The protesters said they were acting in solidarity with a movement called Block the Boat, which aims to block Israel from shipping goods to this continent as a reaction to the recent conflict between Israel and Palestinian militants.

The ship was unable to dock as protestors set up a picket line at the terminal’s entrance, which unionized longshore workers would not cross. International Longshore Workers Union (ILWU) local 505 members are required to tie down and unload ships that enter the terminal.

“We can’t deny that the world is an interconnected place, so the ship that unloads here has an impact on the lives of people on the other side of the world,” said Frances Riley, who was one of several people holding signs.

After confirming with the Prince Rupert Port Authority that the Volans would not be unloading in Prince Rupert, protestors left the entrance, allowing the port to continue with other business. However, they said they would return if the ship attempted to dock again.

CBC has reached out to the Prince Rupert Port Authority, the shipping company ZIM and DP World — The Fairview Terminal Operator — for comment, but has not yet heard back.

The latest round of fighting between Israel and Hamas began last month, when the militant group fired rockets toward Jerusalem after days of clashes between Palestinian protesters and Israeli police.

Israel in turn launched hundreds of airstrikes that it said targeted Hamas’ infrastructure, including a vast tunnel network. The airstrikes also destroyed health and civic infrastructure, a refugee camp and a highrise that housed the Associated Press and other media.

The 11-day conflict has since come to a fragile halt, with a ceasefire, and a new coalition government in Israel has indicated it is likely to pursue a modest agenda that seeks to reduce tensions with the Palestinians.

In May, the Volans tried to dock in Oakland, Calif., but ILWU local 10 members there also refused to cross a similar picket line in support of protestors affiliated with Block the Boat. The Volans then departed for southern California before returning to Oakland to attempt to dock again at the beginning of June, then left for Prince Rupert on June 4.

“Given the victory in Oakland, we are hopeful that the ongoing inconvenience that we’ve caused to ZIM shipping lines and the costliness, how effective we’ve been in terms of political and economic impacts will continue through Prince Rupert as well,” said Lara Kiswani, the executive director of the Arab Resource and Organizing Centre, the leader of the Block the Boat campaign, in a statement.

In a statement emailed to ILWU local 505 obtained by CBC, the International Dockworkers council said, “We would like to express our solidarity with the comrades who choose not to cross the picket line to defend such a noble cause.”