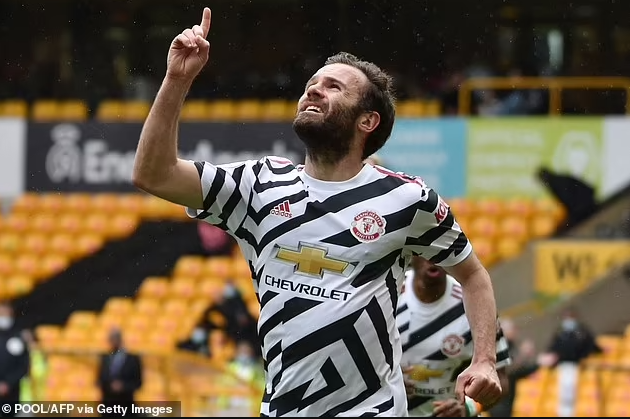 The Spanish midfielder, who was signed by Chelsea in 2014, has made 273 appearances for United, scoring 51 goals and registering 47 assists.

He became a free agent when his contract ran out on Wednesday. But United has confirmed that Mata has signed a new deal at the club until June 2022.

A statement read: ‘Manchester United is delighted to announce Juan Mata has agreed on a one-year contract, keeping him at Old Trafford until June 2022.

Dubbed a magician on the pitch and a gentleman off it, Mata has become one of the most popular players in recent United history, and he is highly respected by all of his teammates.

‘With a new one-year contract agreed and pre-season training about to start at Carrington, Juan is raring to go in what will be his ninth campaign at United. Congratulations on your new deal, El Mago.’

The 33-year-old featured only 18 times for United last season,

The announcement for the 33-year-old’s extension follows Thursday’s confirmation that the club had reached an agreement with Borussia Dortmund for the signing of England forward Jadon Sancho in a deal worth £73m.

Sancho, 21, will undergo a medical following his Euro 2020 before completing his switch to Old Trafford.