Kristen Bell Reveals Her First Impression of Dax Shepard: ‘This Guy Can Talk’ 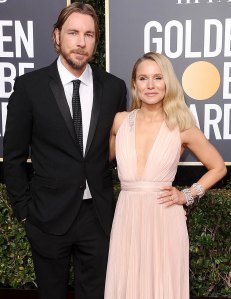 Once upon a time! Kristen Bell and Dax Shepard might be couple goals now, but according to the Frozen 2 star, sparks weren’t flying the first time they met.

“The only thing I remember is that he talked so much,” Bell, 39, joked during an interview on Sunday Today With Willie Geist, airing on Sunday, November 24. “I was like, ‘This guy can talk!’ I didn’t know who he was … There were no sparks whatsoever.”

Bell said that she and her now-husband, 44, had both just gotten out of long term relationships before meeting for the first time at a birthday dinner for Forgetting Sarah Marshall producer, Shauna Robertson, with only a handful of other guests. Upon Shepard’s first impression, the Good Place star wasn’t exactly swept off her feet.

Two weeks after that chance meeting, however, her opinion of her future husband changed. The pair bumped into each other once again at a hockey game and bonded over the same team: the Detroit Red Wings.

Couples Who Shared the Screen After Marriage

“Then a day after that I get a text that says, ‘Hi, my name is Dax. I violated your privacy and got your number from Shauna. How do you feel about that?’” Bell continued. “And I was like, ‘Excuse me? You sound stimulating.’”

The CHiPs costars officially became an item in 2007 and announced their engagement three years later. They waited to tie the knot until the state of California passed legislation legalizing same-sex marriage, which finally occurred in June 2013. Four months later, the two exchanged vows at a Beverly Hills courthouse.

Kristen Bell and Dax Shepard’s Most Honest Quotes About Marriage

Both Bell and Shepard have admitted that their marriage hasn’t always been easy, but they have stuck it out with “hard work, respectful fights, patience, understanding and gratitude.” The Parenthood alum struggled with drug addiction before marrying Bell, but credits his wife and their two daughters, Lincoln, 6, and Delta, 4, with keeping him on track for 15 years of being clean and sober.

“He’s bold,” the Bad Moms star said to Geist of her husband. “He knows what he’s doing, and that was my kind of person. Starting it off with a really good joke that makes me feel butterflies.”