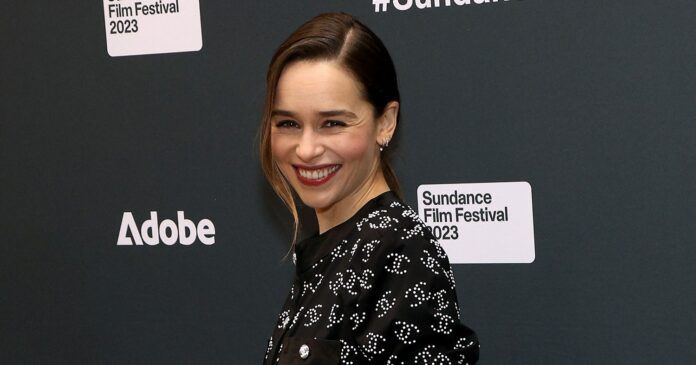 Moving on. Emilia Clarke revealed that her days of fire and blood are over after Game of Thrones, and she has no plans to watch House of the Dragon.

“No! Can you [forgive me]?” Clarke, 36, told Variety on Friday, January 20 when asked about watching HBO’s Targaryen-centric spinoff. The prequel series started in August 2022 stating it takes place 172 years before Clarke’s character, Daenerys Targaryen, was born. It focuses on her ancestors when they had the Iron Throne.

“It’s too weird. I’m so happy it’s happening. I’m over the moon about all the awards,” Clarke added, referring to the show’s Golden Globe win for Best Television Series — Drama earlier this month. “I just can’t do it. It’s so weird. It’s so strange. It’s kind of like someone saying, ‘You want to go to this school reunion that’s not your year? Want to go to that school reunion?’ That’s how it feels. I’m avoiding it.”

Though she hasn’t seen the series, she did offer some words of wisdom to star Emma D’Arcy.

“Yeah. I mean, so Miguel Sapochnik, one of the co-showrunners, he set me up on a date with, so to speak, Emilia Clarke,” the star, 30, told ComicBook.com ahead of the fantasy drama’s August debut.

“God, she was so generous. She gave me hours and she was so candid,” they explained. “And she spoke to all areas of that experience. And, I think, very cleverly, held some stuff back. Stuff to do with the release … But I think she was gently preparing me for the incredible stamina that this job requires and sort of priming me for battle, actually, and, yeah, amazing person.”

While Clarke isn’t trying to look back, her former co-star Kit Harrington is preparing to return to Westeros. He’ll reprise the character of Jon Snow in a spinoff series. When viewers last saw the Targaryen-Stark heir, he was sent to the Wall for killing Daenerys.

Also read: ‘A Walk To Remember’ Cast: Where Are They Now?

“I think if you asked him, he would’ve felt he got off lightly,” Harington, 36, told the audience at a December Game of Thrones convention in Los Angeles via Entertainment Weekly. “At the end of the show when we find him in that cell, he’s preparing to be beheaded and he wants to be. He’s done. The fact he goes to the Wall is the greatest gift and also the greatest curse.”

Also read: Everything You Need To Know About Streaming App QEWD

He concluded by teasing, “I think where we leave him at the end of the show, there’s always this feeling of like … I think we wanted some kind of little smile that things are OK. He’s not OK.”

The Jon Snow spinoff is still in development while House of the Dragon has been renewed for season 2.