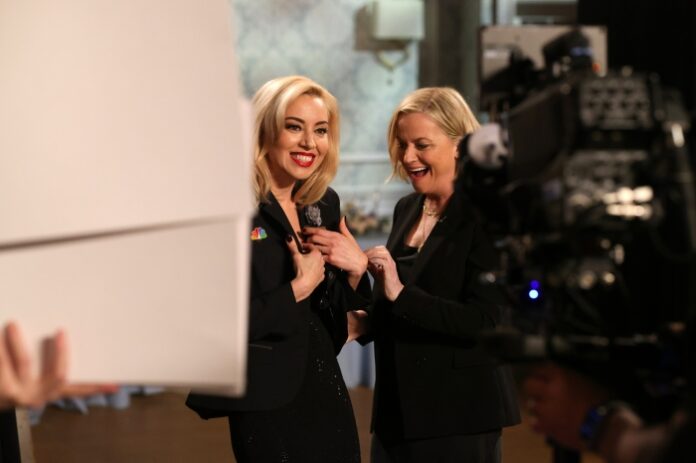 Reunited and it feels so good! As Aubrey Plaza hosted Saturday Night Live for the first time, she had a VIP guest help show her the ropes: Amy Poehler.

“On every tour people would ask the same question, ‘Are we going to see a celebrity?’” Plaza, 38, quipped on Saturday, January 21, while recalling her memories in the NBC Page program, where she would show tourists around the network building. “No, you’re going to see an old security guy eating a sandwich or a writer crying because a sketch got cut.’ Famous people don’t just —!”

As the Little Hours actress walked through the 30 Rock set — in a Page blazer — she nearly ran into Poehler, 51. “Hi, Aubrey,” the Baby Mama actress exclaimed, giving her former Parks and Recreation costar a hug. “Oh my God, look at you!”

Poehler added: “So, Aubrey, I see that you’re wearing your Page jacket. Are you drinking again? … Aubrey, it’s not nice to call people old!”

Also read: Arsenal have what we don’t have #Guardiola

The White Lotus star — who helmed the first SNL episode of 2023, alongside musical guest Sam Smith — was even able to persuade Poehler to join her for a sketch. The two women, who played Leslie Knope and April Ludgate on Parks and Rec, respectively, later reprised their sitcom roles during a “Weekend Update” segment.

“Local governments are having trouble hiring new employees, here to encourage young people to get involved in local government is a longtime employee of the city of Pawnee, Indiana,” SNL star Colin Jost said, introducing their two characters to the “Update” desk.

Plaza, for her part, wore April’s signature hoodie and a wig with her signature fringe bangs. “Everybody should get involved where they live, if you’re young you should get a job as a garbage man or something,” she told Jost, 40, with her trademark deadpan, before listing other jobs where people could do the “bare minimum” and still “do your part.”

While Plaza was “annoyed” to answer the New York native’s questions, she directed further inquiries to her “old boss” Leslie Knope (Poehler).

Also read: Here’s Where #SSSniperWolf Got The Inspiration

“Look at this! Who knew there were cameras at SNL!” Poehler — who used to helm “Weekend Update” alongside Seth Meyers — joked in character. “So, how much fun is it working here? … I want to pick your brain about this job, about this show because I used to watch this when Seth Meyers did it by himself with no one else and he made it look really easy.”

The Sisters star even swapped places with Jost to “try” and read off one of his next jokes, however, she had difficulties finding one that wasn’t “too mean.”

Plaza’s Saturday appearance marked her SNL hosting debut — which also included a spoof of The White Lotus — that she called a “dream come true” in her monologue.

Saturday wasn’t the Golden Globe nominee’s first time on the 30 Rock stage. Plaza once bombed an early audition to join the cast of ensemble players.

“I didn’t make it to the Lorne [Michaels] audition, the famous final audition, but I did a preliminary first-round showcase,” the Delaware native recalled during a Tuesday, January 17, appearance on The Tonight Show Starring Jimmy Fallon. “I remember one character I did was like a Puerto Rican news reporter that was always trying to make all of the news stories sexy, even if they were horrific news stories. I was just trying to like, sex up the news or something.”

Plaza also hoped her “pill-popping housewife” character would be a hit with the show executives — to no avail. While neither of the Ingrid Goes West star’s characters propelled her enough to land a coveted cast member gig, she did earn an internship in the design department in 2004.

“They loved me because I did not care about set design at all, and they wanted an intern that had no interest in learning what they did,” she recalled to Jimmy Fallon on Tuesday, noting she frequently spent her time “lurking in the shadows” around the cast. “I was just, like, creepy. Like, I was a creepy stalker. Now I’m gonna host it, so my master plan worked!”

While the Emily the Criminal star — who quietly married Jeff Baena in May 2021 — may not have gotten to join SNL as a cast member, she eventually landed the role of April on Parks and Rec, which aired on NBC. The show ultimately wrapped in 2015, and the actress went on to book a steady stream of comedic films. She later returned to TV last year, landing the role of Harper on HBO Max’s The White Lotus.

“It was incredible. We were shooting in Sicily for four months, living in a luxury hotel and staying in this gorgeous town,” Plaza gushed to Deadline in November 2022 of joining Mike White’s anthology series. “You walk outside and look at the ocean from these cliffs. It’s breathtaking. And you’ve got the backdrop of Mt. Etna volcano that can erupt at any second. Damn, that just kind of infuses the whole scene with this wild energy.”

For more, watch the clip above! 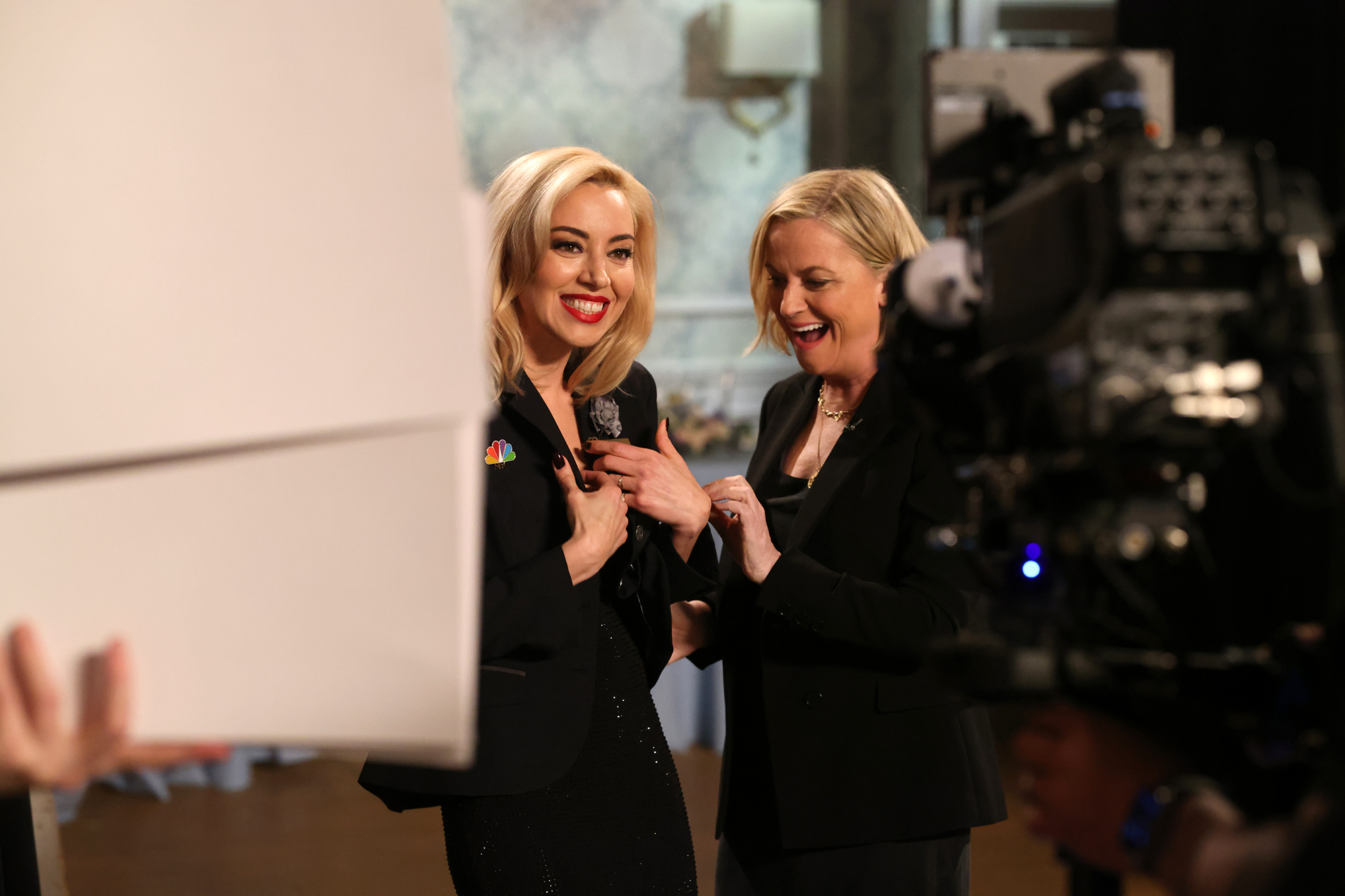 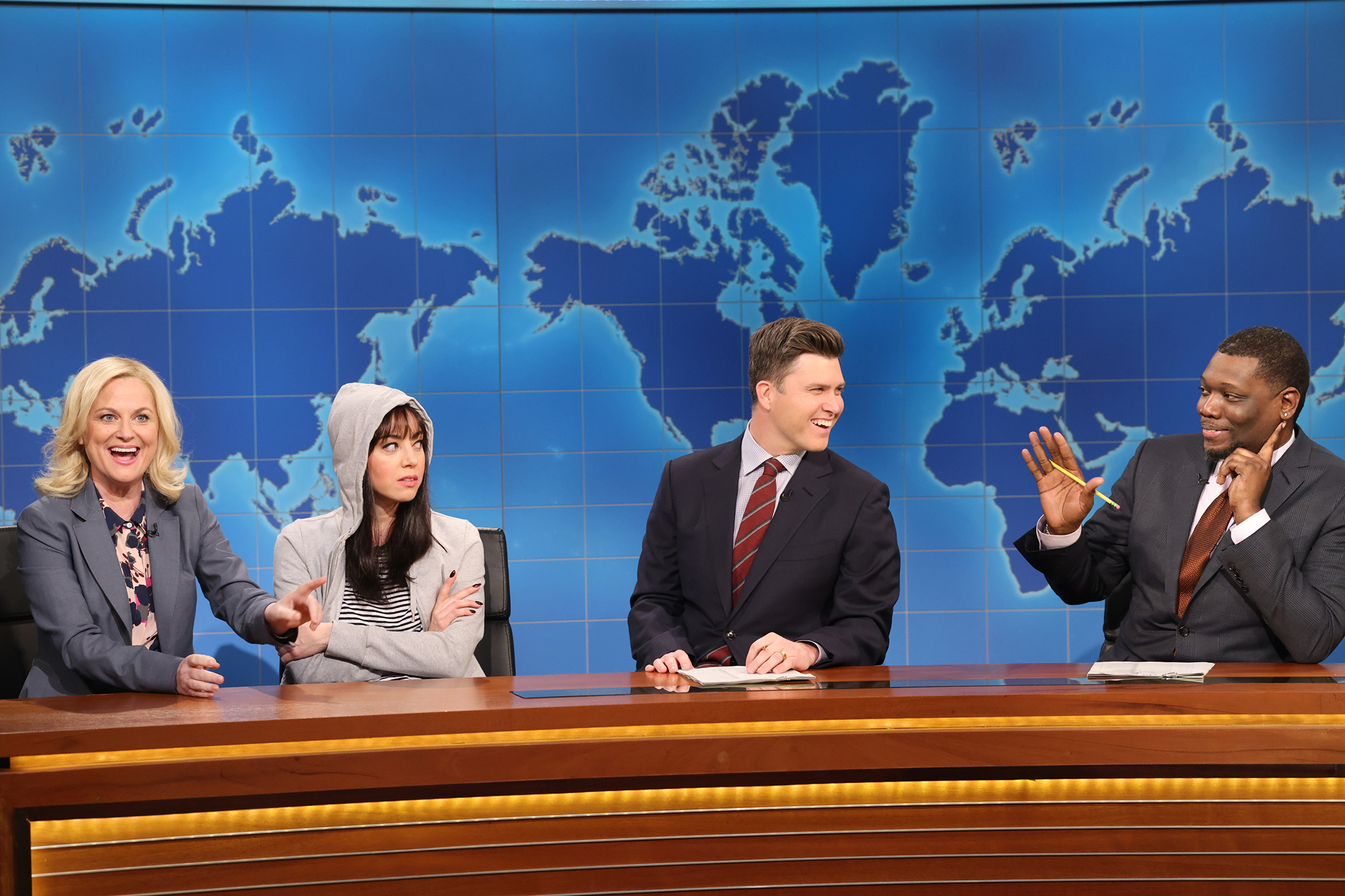