Doctor Explains What Collapse Of The NHS Actually Looks Like: ‘It’s Already Here’ 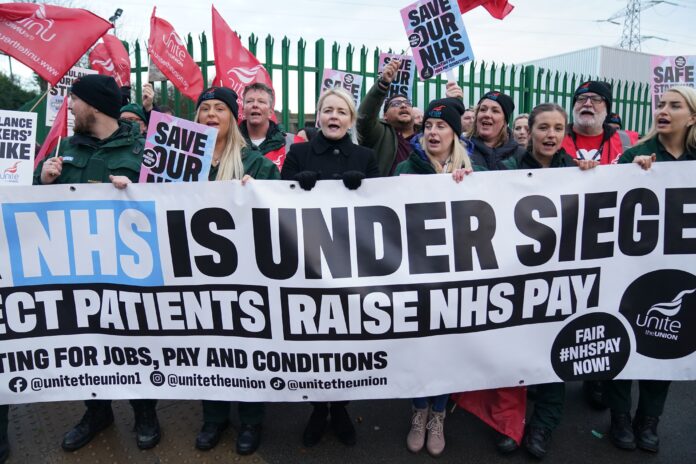 The current chaos within the NHS is proof that the health service is already collapsing, according to one doctor.

The breakdown of the NHS has been a looming concern for years as commentators, health workers and patients warn that they’re overstretched, understaffed and underfunded system will fail without further input from the government.

Now, after two historic days of strikes for NHS nurses and a walkout from ambulance workers, it’s clear the disintegration of the service is “already here”, Dr Philip Lee has claimed.

Speculating over what a “collapse” would actually look like, he tweeted: “It’s not going to be bricked up hospitals and no one answering 999, it’s going to be lowering standards and rationing care. Acknowledging we can no longer help everyone who calls.”

When people ask what a collapse of the NHS would look like, it’s this, it’s already here.

It’s not going to be bricked up hospitals and no one answering 999, it’s going to be lowering standards and rationing care. Acknowledging we can no longer help everyone who calls.

He continued: “We now live in a world where the NHS will only have resources to treat and save the gravest emergencies, in far less than optimal situations.

“If we continue to operate as we did before, a greater number of people will die or come to harm.

“So we have to acknowledge that we cannot dispatch an ambulance for every call, that your GP will not visit your home but for exceptional circumstances, that you will not get an appointment within two weeks.

“And yes, that will mean more suffering, even death.”

He predicted that there is “no cavalry over the horizon” as the government are not going to U-turn after years of cuts.

Hospital and ambulance trusts around the country declared “critical incidents” on Tuesday, with people being cautioned to only call 999 in life-threatening emergencies.

The military has also been drafted in to drive ambulances amid the current strikes, as paramedics, technicians, control room workers and other staff walk out too.

And while the government is trying to stand firm and resist calls for a pay rise, the historic nurses’ strike is still being backed by two-thirds of the country, according to YouGov. Most Brits are blaming the government for the NHS walkouts.

If ministers do not open discussions about pay and working conditions, the nursing unions will consider further walkouts in January and over the next six months.