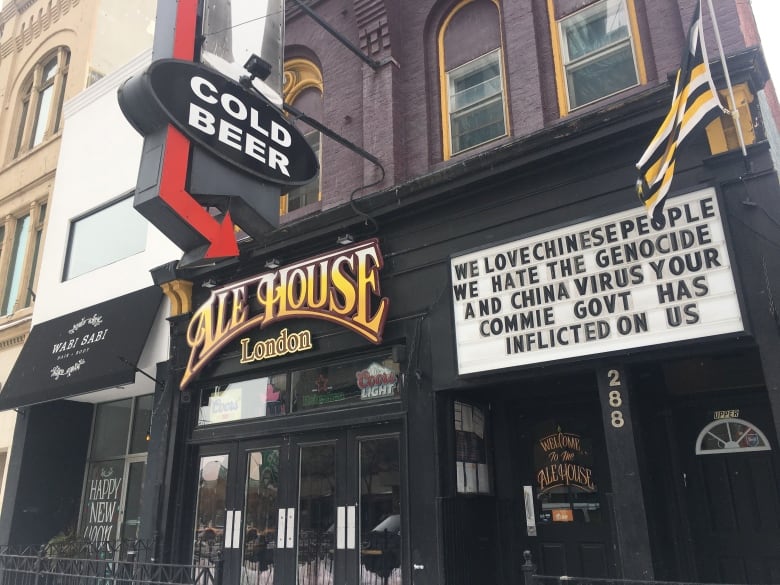 People in London, Ont., are calling for political action after seeing a sign at a downtown bar earlier this week that they say directly targets the Asian community.

The marquee board at the Ale House, which is known for controversial messaging, had criticized Premier Doug Ford’s measures to stop the spread of COVID-19. On Thursday morning, the board read, “Mr Ford, history will show lockdowns caused more damage 2 the public then [sic] the China virus!”

It prompted a swift response across social media, with calls for the message to be removed immediately.

A petition launched Thursday morning called on Mayor Ed Holder to do so, amassing more than 2,000 signatures in several hours.

By lunchtime, the restaurant had changed the sign to read, “We love Chinese people we hate the genocide and China virus your commie govt has inflicted on us.”

Jina Zhang, who has lived in London for 10 years, said using the term “China virus” is anti-Asian and hateful toward the minority group in the community.

“We are angry,” Zhang said, noting that she’s always felt safe in the city, until now.

Ben Cai, a student at Western University, echoed those concerns, calling the sign a direct attack on the Asian community.

“[It] makes Asian people feel uncomfortable and worried and concerned about our own safety,” said Cai, who is Chinese.

He said using the term “China virus” is racist and lays blame on a minority group for the COVID-19 pandemic.

CBC News tried to contact the owner of the Ale House on Thursday by visiting the establishment, calling and sending emails, but was unable to reach anyone for comment.

Politicians called on to respond

Alexandra Kane, lead activist with Black Lives Matter London, said the city’s No. 1 priority should be to immediately take the message down.

Kane said after coming across a post on social media calling for its removal, she was prompted to reach out to the chief of police, the chair of the London Police Board chairs and city councillors.

Racism against any group should not be tolerated, Kane said, and hateful speech against the Asian community should not be allowed by the City of London.

“It’s going into racist rhetoric and that shouldn’t be allowed to be publicly displayed in our city,” Kane said. “It’s hate speech, is what it is.”

In a tweet Thursday, the City of London said bylaw officers will not get involved, as municipal bylaws address signage from a “public safety and urban design perspective.”

“Because of this, City by-law officers would not be involved with concerns about content but would bring such concerns to the attention of our partners at London Police Service for their review,” the City of London said in a tweet.

Coun. Arielle Kayabaga said the city is examining the incident.

“We received this horrible communication today and our staff have been informed and are looking into it,” Kayabaga said in an email Thursday.

Over the years, Ale House owner Alex Petro has used the board to display political messages, such as commentary on minimum wage increases and recent masking rules.

Being a university town, London has a large population of students from outside the country.

The heads of Western University and its affiliated colleges, King’s, Brescia and Huron, said they have an obligation to speak out against racism.

“It is unacceptable for our students to be subjected to acts of racism in the city where they choose to make a home,” the leaders said in a joint statement.

“The multiculturalism of our students contributes so much to the cultural fabric of our society. As a country made up of Indigenous people and settlers, how can we do anything but embrace our diversity as it enriches every aspect of the Canadian mosaic?” said the statement.

It goes on to say, “We urge [Londoners] to join us and call out racism when you see it, to be vocal when the dignity of anyone is questioned, whether it is the colour of their skin, the deity they worship or the people they love. Racism has no place in this city, this province, this country.”