2023: All Yoruba ancestors are with you – Oba of Lagos gives royal blessings to Tinubu 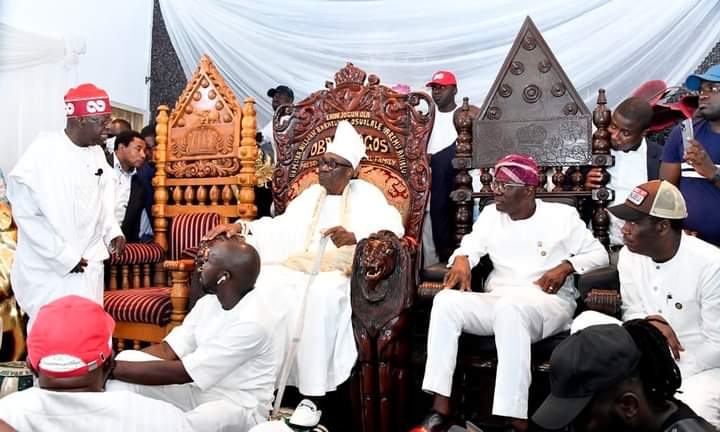 The Oba of Lagos, Rilwan Akiolu has assured the All Progressives Congress, APC, presidential candidate, Bola Ahmed Tinubu that ancestors of Yoruba land would ensure his victory in 2023.

The Oba gave the blessings on Sunday when the Asiwaju of Lagos paid him a visit on his return to the State after clinching the APC ticket earlier in the month.

Also read: OBI WilL REALIZE THAT POLITICS IS DONE WITH MONEY AND NOT WITH ONLINE FAN BASE – Joe Igbokwe

According to the monarch, Tinubu’s victory at the 2023 presidential election would make the Yoruba land a better place.

He said, “Your emergence as the presidential candidate of your party is the beginning of another journey in your political career.

“All Yoruba ancestors shall be with you on this journey to make our fatherland a better place.”

Earlier, Tinubu, a former governor of the State told the monarch that his efforts to succeed President Muhammadu Buhari was to ensure that the Yoruba nation is properly represented at the national level.