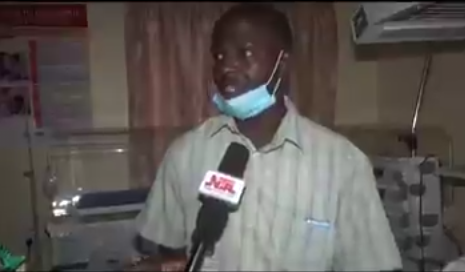 The Father of a newborn baby in an incubator has denied a claim by the Kaduna State Government that nurses disconnected their child’s oxygen supply to join the labor strike.

It will be recalled that the State Government had alleged that three nurses at Barau Dikko Teaching Hospital disconnected the oxygen supply of the two-day-old baby in an incubator on Monday, May 17.

Speaking to NTA News, the father said his baby is doing okay, adding that she was not placed on oxygen at that moment.

“Even then, the oxygen was not in her mouth because they said she was stable at that moment. We were the ones that emphasized that we have to carry our baby to another hospital,” he said.

Meanwhile, the National Association of Nigeria Nurses and Midwives (NANNM) Kaduna State Council has described the accusation by the Government that its members removed oxygen from a two-day-old baby as unfounded and misleading to the public.

A statement issued by Chairman NANNM Kaduna State Chapter, Comrade Nurse Ishaku Yakubu, on Wednesday, May 19, said investigations carried out by the association revealed that the baby is alive and doing well in private facilities in the state.

“An investigations carried out by the union have revealed how the nurse on duty helped to plead with the generator plant technician to allow the light in the hospital as a patient was on oxygen and to allow for the transfer of the same patient in the morning as the strike was to start midnight of 15th May 2021. Contrary to the allegations and false statements, the nurse went extra miles to ensure the safety of the child and other patients, as it is known of a nurse.” the statement reads.