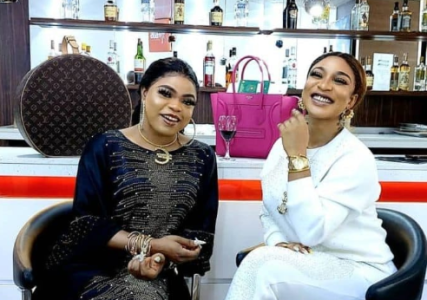 Nigerian cross-dresser, Bobrisky took to his Instagram page to revealed that he shares the same bra size with Tonto Dikeh and that she has ‘codedly’ taken him for an a$$ surgery.

Bobrisky said this while reacting to the post which she made earlier about him, while referring to the male Barbie as ‘him’.

As we all know, Bobrisky hates being referred to as a ‘he’ or anything likened to a male. He enjoys being called a ‘fine girl’. Tonto Dikeh made the mistake today and Bobrisky has called her out.

“Can everybody help me warn dis @tontolet girl ?. We use d same bra size and you are still using him for me ???. You carry me go do a.ss surgery coded you are still calling me him.

As for you my second bestie @anitajoseph8 you also confirm me as him CHINEKE !!!!!! ?????? am coming to Nigeria soon to deal with you. See as tonto cast me. I work hard so let me spend my money on bags and shoes biko”