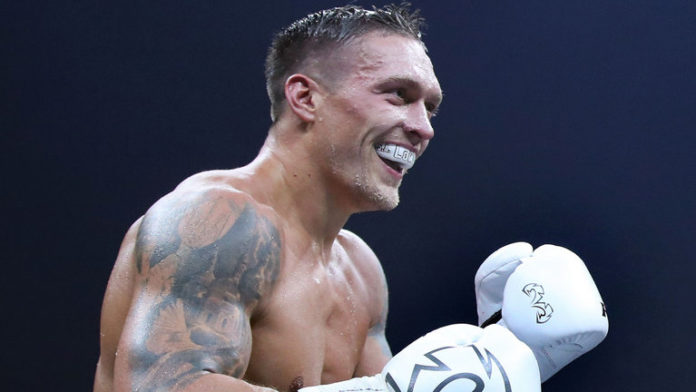 The Ukrainian, who has been sparring with Isaac Chamberlain ahead of ‘British Beef’ on March 3, live on Sky Sports, took a narrow points success in Riga, Latvia, with scores of 114-114, 115-113, 115-113 earning him the WBC belt while retaining his WBO title.

Usyk, the tournament’s No 1 seed, will now wait and see who wins next weekend’s semi-final between IBF holder Murat Gassiev and WBA ‘super’ counterpart Yunier Dorticos, with the inaugural Muhammad Ali Trophy and the chance to become the first cruiserweight to hold all four belts on the line in the final.

But anyone who witnessed Saturday night’s non-stop, barnstorming battle would not have complained if it was Briedis who was just one step away from history.

The Latvian made the brighter start, spurred on by a passionate crowd crammed into the Arena Riga, with his sharp combinations and accuracy giving him the opening exchanges.

A lovely left-right combination caught Usyk at least once in each of the opening rounds and, troubled by an accidental clash of heads, the London 2012 gold medal winner was kept on the back foot.

He did swing the balance in the fourth, landing slightly more clean shots as the pair traded blows in the centre of the ring, but Briedis turned up the heat in the fifth and sixth; his ferocious starts and combinations catching his foe.

Usyk’s rapid-fire jab saw him pin Briedis on the ropes in the sixth for the first time and, with a clear spring in his step, he began the second half of the semi-final by taking the lead.

Rounds eight and nine were arguably the only sessions that slowed down, albeit slightly, but again Usyk kept coming forward, going for the body and using his reach to disrupt the Latvian’s impressive rhythm.

The final two rounds, though, saw both give as good as they got. Usyk started the 11th as if his record and title were hanging in the balance and the final round again saw it swing – this time Briedis pinning him on the ropes and catching him in a cracking close.

The knockout format meant for the first time there was a fourth judge in action in case it ended in a draw and Usyk made the final by the narrowest of margins.

On the undercard, Shepherd’s Bush cruiserweight Mikael Lawal, who was in Usyk’s Kiev training camp, continued his unbeaten start as a professional, with a unanimous decision over the experienced Istvan Orsos in six rounds.

Henry Onyekuru Super Eagles forward can’t believe he’s now playing with childhood hero, Mikel
Exclusive Report: An Ordinary Student From Nigeria Earns $200 A Day While Staying At Home
NFF confirms Super Eagles’ friendly match with England for June 2nd
‘House of Cards’ writers racing against the clock to rewrite show
Alex Iwobi is trying to end his own career
US carriers in rare Pacific op amid North Korea tensions
Photo: Nollywood actress/Vlogger, Cynthia Amadi, welcomes son with her American hubby
Yes, You Can Wear Sneakers to the Holiday Party—Just Ask Rihanna
Buhari’s admin declared IPOB a terror group but has refused to label Fulani herdsmen a terror group’- Reno Omokri
Man narrates how he did his wedding introduction on the day he met his wife for the first time
‘The hopes of all Nigerians will become a reality in 2018’ – Atiku
3 people who died but came back to life
The world reacts in anger to Donald Trump’s “sh*thole” comments
‘My government will improve aviation infrastructure’ – President Buhari
Ronaldinho Brazil great has retired from football according to his brother
Odunlade Adekola signs out of Unilag
Twitter Stories: Guy dating two colleagues in the same office at the same time gets busted and a fight breaks out
Sir Bobby Charlton Pays Tribute To Jimmy Armfield
Soft ft. Davido – Tattoo (Remix)
Yomi Casual & Wife Grace Welcome Daughter Kahley