Miley Cyrus and Kaitlynn Carter Split After a Month of Dating 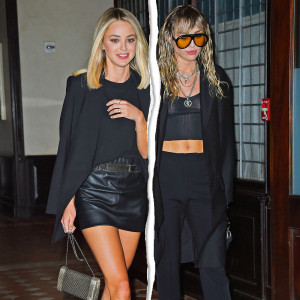 Miley Cyrus and Kaitlynn Carter have called it quits on their relationship a little over a month after they started dating, Us Weekly can confirm.

Miley Cyrus and Kaitlynn Carter: A Timeline of Their Whirlwind Relationship

The split came as the “Slide Away” singer, 26, headed to Las Vegas on Saturday, September 21, with her mom, Tish Cyrus, and her big sister, Brandi Cyrus, to attend the iHeartRadio Music Festival, where Miley was set to perform.

The Hills: New Beginnings star, 31, remained at home in L.A. where she showed off a pair of fluffy slippers on her Instagram Stories while relaxing on her sofa.

The pair were first linked in early August, when they were spotted locking lips on vacation in Italy. Pics of the pair hooking up surfaced hours before Cyrus confirmed the end of her marriage to husband Liam Hemsworth on August 10 after less than eight months of marriage.

Carter and longtime boyfriend Brody Jenner had announced their own split just a week earlier. The pair, who were together for four years, tied the knot in a lavish wedding in Indonesia in June 2018 but weren’t legally married because they never filed the paperwork upon their return to the U.S.

Things quickly heated up between the blogger and the “Don’t Call Me Angel” singer, with Carter wearing a ring with the letter “M” on her engagement ring finger when they attended New York Fashion Week in early September.

Miley Cyrus and Liam Hemsworth: The Way They Were

A source told Us earlier this month that they had “really fallen” for each other.

“Miley and Kaitlynn are on the same page, which is why they work so well together,” the insider said.

The source added that Cyrus felt she could “totally be herself with Kaitlynn” and was “really comfortable around her.”

The lovebirds, who vacationed in Europe with Brandi, were also seen out at lunch with Tish in L.A. They were also spotted in a public makeout session at ACME in NYC earlier this month, where an eyewitness told Us at one point they “were making out against a wall in full view of everyone.”