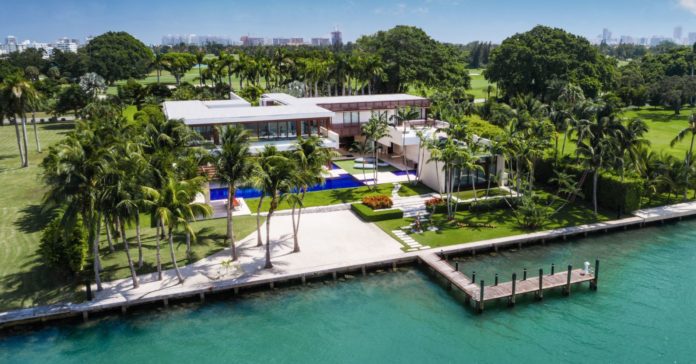 An estate on Indian Creek Island sold for $50 million, making it the most expensive single-family home ever sold in the Miami area, according to people familiar with the deal.

The property, at 3 Indian Creek Island Road, was not officially listed, but had sold in 2012 for $47 million. At the time, that marked a new record for the most expensive home ever sold in Miami-Date County. So with the current sale, the home will have set the Miami record twice.

The sale comes as the real-estate market in southern Florida has gotten off to a strong start of the year, helped in part by the new tax law which makes it more attractive to live in low-tax states.

The names of the buyer and seller of Indian Creek weren’t disclosed. The buyer of the property in 2012 was an LLC, and was purchased by a Russian businessman, according to news reports.

The transaction was brokered by Tal Alexander and Oren Alexander of Douglas Elliman.

The question of whether the sale will officially be the most expensive ever in Miami will remain a source of debate. Ken Griffin, the Chicago-based hedge-fund manager, bought two apartments — a penthouse and unit below — in the Faena House in 2016 for $60 million. But that sale was for a condo, and the Indian Creek home is a record for a single-family home.

Griffin never combined the two units and they are now for sale.