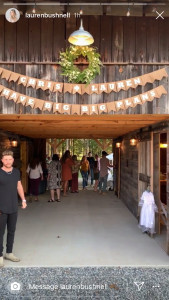 The couple, who got engaged in June, shared photos on their Instagram accounts that showed them smiling ahead of the festivities.

The “Take Back Home Girl” singer, 34, posted a pic that showed him kissing his bride-to-be on the cheek as they stood on a porch accented with pumpkins and fall decorations. “It’s been an incredible year in my career as well as my personal life,” he wrote. “Took the weekend off to celebrate our engagement in Kernersville with both of our families!! I’m a lucky man!”

Celebrity Engagement Rings of 2019: See All the Diamonds and Bling

She later posted a video on her Instagram Stories that showed the singer standing in a rustic barn decorated with a banner that read “Chris + Lauren Have Big Big Plans,” in reference to the song Lane wrote for Bushnell when he proposed.

Lane proposed to Bushnell on June 16 at her family home in Oregon while she was in town for Father’s Day.

“I can’t stop smiling I feel so incredibly blessed that every misstep, mistake and heartache has led me to you,” she wrote two days later on Instagram. “I couldn’t be happier to call you mine, forever. The journey was well worth it. Thank you Christopher Eric Lane for softening my heart and making it whole. Never going to stop telling you how much I love you and I will hold onto you forever and ever! Lauren Lane has a nice ring to it PS he wrote me a song … I can’t stop listening or looking down at my hand.”

Lauren Bushnell and Chris Lane’s Whirlwind Romance: From Their First Dates to Their Engagement

The flight attendant, who appeared on season 20 of The Bachelor, got engaged to Ben Higgins on the season finale in March 2016. They split in May 2017.

Us Weekly confirmed in November 2018 that the couple were dating and things quickly heated up between the pair, with Lane sparking engagement rumors just two months later when he referred to Bushnell’s dad as “my potential future father-n-law” when the pair played golf together.

Since their engagement, the couple have adopted a dog named Cooper and bought a house together.