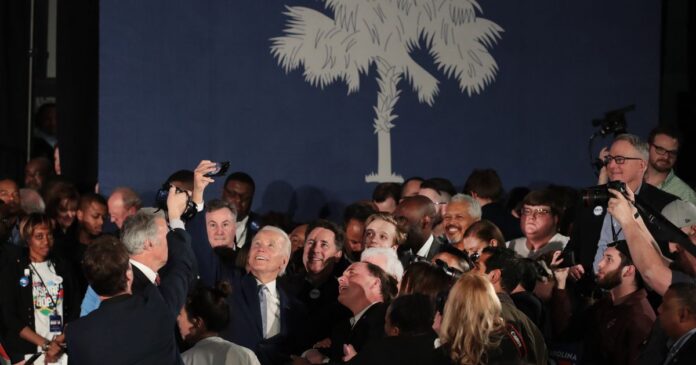 President Joe Biden is recommending the Democratic National Committee make South Carolina the first state to vote in the 2024 presidential primaries and take away Iowa’s status as an early-voting state entirely.

Biden’s decision infuriated New Hampshire Democrats — who view having the first-in-the-nation primary as a matter of state law — and Nevada Democrats, who had gathered significant support from progressives and Black, Latino and Asian American Democratic groups for their own bid to vote first.

“Just like my Administration, the Democratic Party has worked hard to reflect the diversity of America — but our nominating process does not,” Biden wrote in a letter to members of the DNC’s Rules and Bylaws Committee, which is set to finalize a decision on the voting order this weekend. “For fifty years, the first month of our presidential nominating process has been a treasured part of our democratic process, but it is time to update the process for the 21st century. I am committed to working with the DNC to get this done.”

The White House envisions South Carolina voting first, followed by New Hampshire and Nevada a week later, with Michigan and Georgia filling two final early voting slots. Iowa would not be one of the early-voting states. The decision was first reported by The Washington Post.

The recommended changes would complete a slow reshaping of presidential primaries that has been underway since the 2000s when Nevada and South Carolina first joined Iowa and New Hampshire as early-voting states. The new slate of states will be significantly more diverse — South Carolina and Georgia’s Democratic electorates are dominated by Black voters — and will also include major metropolitan areas like Detroit and Atlanta for the first time.

Biden is also recommending the elimination of caucuses, which many state Democratic parties had already begun to abandon. Voting rights advocates and progressives have long complained that caucuses — which can require attendees to wait for hours to have their votes counted — put up unnecessary barriers to participation and also lower turnout rates.

Biden also suggested this new order should not be permanent. Considering the likelihood Biden runs for reelection in 2024 with little intra-party opposition, the calendar may not matter much. “The Rules and Bylaws Committee should review the calendar every four years, to ensure that it continues to reflect the values and diversity of our party and our country,” Biden wrote.

It’s clear Biden is rewarding his friends with the decision as much as he is seeking to diversify the primaries: His political comeback in 2020 began with a massive win in South Carolina only weeks after he finished fifth in Iowa’s ramshackle 2020 caucuses, which were marred by a malfunctioning app that made it difficult to track results.

Iowa and New Hampshire have dominated the early part of the presidential primary schedule since the 1970s, and Black and Latino Democrats have long complained about the outsized influence handed to two lily-white states.

Iowa’s status as a caucus state and its 2020 fiasco made it clear Iowa would lose power when the DNC made a decision. But New Hampshire — which is the fourth-whitest state in the nation — had done nothing similar to deserve such a demotion.

Ray Buckley, the chair of the New Hampshire Democratic Party, quickly put out a statement reiterating there is nothing the DNC can do to prevent the state from voting first.

“The DNC did not give New Hampshire the first-in-the-nation primary and it is not theirs to take away,” he said. “This news is obviously disappointing, but we will be holding our primary first. We have survived past attempts over the decades and we will survive this. Our first-in-the-nation primary has been an integral part of our state’s history for over 100 years, and is enshrined in state law.”

Nevada Democrats, who had pushed to vote first, also reacted harshly to the decision.

In a statement, Sens. Catherine Cortez Masto and Jacky Rosen pointedly noted South Carolina’s hostility to unions — which make up a major part of the Democratic coalition.

“We strongly believe the first presidential nominating contest should be held in a competitive, pro-labor state that supports voting access and reflects all of America’s diversity – in other words, a state that actually aligns with the DNC’s own priorities for updating the calendar,” Rosen and Cortez Masto said. “This proposed new order for the early states disregards the broad coalition of national organizations and leaders calling for Nevada to go first, and instead elevates a state that doesn’t meet the criteria to start off this process.

Michigan Democrats, however, praised the decision. “We have always said that any road to the White House goes through the heartland and President Biden understands that,” Michigan Democratic Party Chair Lavora Barnes and Rep. Debbie Dingell said in a statement.

The addition of Georgia and Michigan could also dramatically reshape the presidential calendar. Even though the states are slated to vote fourth and fifth, respectively, the sheer number of delegates they award means candidates will likely start visiting them from the get-go of any campaign.

The DNC’s Rules and Bylaws Committee will vote this weekend, followed by a vote of the full DNC in February. It’s unlikely either group will make major changes to the White House’s request.