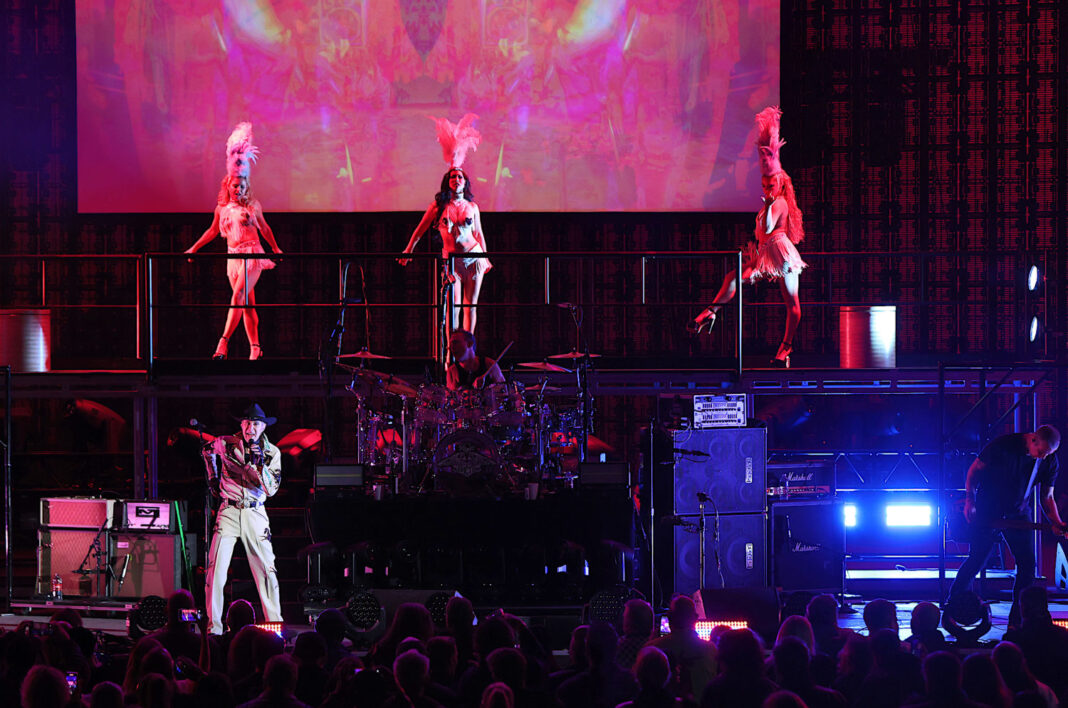 A double dose of dynamic, at times dramatic, the musicianship was showcased at the Hollywood Bowl Saturday night as Jane’s Addiction and Smashing Pumpkins brought their co-headlining Spirits on Fire tour “home,” as Perry Farrell said lovingly near the end of his set. The majestic surroundings of the Bowl framed both bands in complementary ways, making the chilly Saturday night feel downright sultry at times, especially during the early part of the show.

The bands came together in the spirit of friendship and celebration of their long careers and collective music for the 32-date outing. That’s the way Farrell and Billy Corgan portrayed it when they announced the tour on The Howard Stern Show back in May. It’s been a seemingly challenging outing though, with illnesses and injuries before and during the tour. With this in mind, the show was quite stellar. And while it’s probably not fair to compare these two legendary groups, it must be said: from setlist to audience interaction, Jane’s was just more smashing.

Also read: Alaska’s Tshibaka: McConnell’s Millions ‘Would Have Been Better Spent In Other States’

In general, Perry is a more giving frontman than Corgan. That doesn’t make him a better one, per se, but on Saturday, the contrast was striking. Farrell – who canceled a few gigs earlier in the tour due to injury– was humble and funny and conversational, sipping wine and talking about everything from the plight of the people in Iran to traffic in L.A., where his band got its start in the underground clubs of Downtown, and just down the road in Hollywood, a region JA also repped in their early music, not for its glamor but for its grime (as everybody knows, walking St. Andrews Place in “Jane’s Says” was about scoring dope).

Jane’s set featured mostly songs from this hungry, often harrowing early part of the group’s career, with half coming from their major label debut, Nothing’s Shocking and the rest from their even more successful follow-up Ritual de lo Habitual. We even got a track from the band’s Triple X Records self-titled live classic–“Whores,” one of their most ominous tracks (and also the name of punk innovator and now-passed wowplus contributor Brendan Mullen’s oral biography about the band).

It was a near-perfect end-of-the-tour hometown set. Dave Navarro, who had to bow out due to long COVID, was missed (Queens of the Stone Age’s Troy Van Leeuwen was fine, but he understandably didn’t try to fill Dave’s shoes), and seeing Eric Avery back in the fold on bass did make up for it. Any Jane’s fan knows that the basslines are a potent part of their sound and they felt more thunderous than ever on Saturday. Stephen Perkins proved why he made this list years ago once again, pummeling each tune with an array of infectious beats. Even Farrell’s upper register wails hit nearly every time. And while we usually find the sexy dancer elements of Jane’s shows a distraction, this time they made sense due to the way they were edited and projected on the screens that bookended the stage.

About those screens– we’ve noticed a new trend, especially with older bands, that we really don’t love. Many are starting to forego close-ups in favor of further away shots or no view of performers at all. We enjoy unique projected video elements, but these LCDs are also there to help audiences, especially in the back, connect with the artist by seeing their expressions and moves. We had decent press seats and yet we saw very little of Jane’s themselves, and practically none of the Pumpkins, as the camera stayed at such a distance we could barely make out what Corgan was wearing, much less his creepy-cool silver makeup (we only saw that via media photos here).

Corgan’s vocals were as expressive as ever (he had laryngitis only a few weeks ago) and we even enjoyed his psychedelic guitar noodling moments, but the track choice was a huge disappointment. It’s not new for the Pumpkins to forgo sing-along hits for newer material in their shows, but to not have even a single song from their rapturously rockin’ debut, Gish was a huge mistake. “I Am One” might have even been enough. Many of the fans –we’d venture most– who dropped hundreds for a ticket and weathered the brisk eve, became Pumpkins devotees because of the beauty and power of that first record (and its groovy MTV videos). We did.

But instead of throwing us old-timers a bone, there was an appeal to younger fans with Willow Smith as a guest adding nothing to Siamese Dream’s “Cherub Rock.” It did get the band some music and gossip blog press the next day, at least. Poppy, a young artist who has intrigued us on the web with her mysterious persona and dark take on pop/light play on metal, didn’t seem to go over very well in her opening set, but she was far more interesting.

Apparently, the band has been rolling out material from a new three-part album (Atum) on tour and Saturday’s set was more crowdpleaser-driven than most from the tour. Emo girl aside, we were grateful for the three songs from the sophomore classic Siamese Dream: “Today” and closer “Silverfuck.” If you love Mellon Collie and the Infinite Sadness, you surely disagree with our assessment here; they played five numbers from the ethereal two-part album. David Bowie pianist Mike Garson guesting on “Tonight, Tonight,” was a high point. We also dug the weird cover of Talking Heads’ “Once in a Lifetime.” Honestly, we enjoy anything Corgan covers and wish he’d done more! The last time we reviewed a Pumpkins show he did and it was magical.

Drummer Jimmy Chamberlin and guitarist James Iha were on point sonically, but we do wish we could’ve seen them better. Corgan’s adorable kids came out to dance during a number too, but we might not have noticed if not for the music video they were emulating screened above.

Smashing Pumpkins biggest gifts come from the atmosphere and emotions their music creates, and in that regard they brought it. Their striking lighting design helped a lot, too. Jane’s Addiction had less elaborate production, but a more visceral connection. Song choice and visibility complaints aside,  we’re glad we didn’t have to suffer any FOMO for what was a memorable convergence of two influential alternative music makers in our favorite outdoor setting. Setlist below.

Up the Beach
Whores
Ain’t No Right
Ocean Size
Then She Did…
Jane Says
Stop!
Ted, Just Admit It…
Mountain Song
Three Days
Been Caught Stealing

Empires
Bullet With Butterfly Wings
Today
We Only Come Out at Night
Cyr
Once in a Lifetime (Talking Heads cover)
Solara
Eye (with The Veronicas)
Ava Adore
Tonight, Tonight (with Mike Garson)
Starla
Stand Inside Your Love
Cherub Rock (with WILLOW)
Zero
1979
Beguiled
Silverfuck