IPOB not a terrorist organisation say ECA, ILT as Security chiefs get orders on B-Haram, IPOB, others 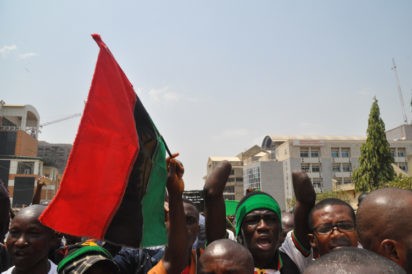 The marching order came after a closed-door meeting the service chiefs and other security agencies had with the President at the Presidential Villa, Abuja. Briefing State House correspondents after the meeting which lasted over three hours, Chief of Defence Staff, CDS, General Gabriel Olonishakin, said the directive was to promote the unity of the country and protect lives and property of the citizenry.

He said the security chiefs were told to enhance their operations and ensure that troops carried out their assignments effectively.

He said: “We have been meeting with Mr. President for the last three hours. All we have done is to update him on all security issues around the country, within the country and outside the country where our troops are.

“Of course, we have just updated him because he is aware of what’s been happening. He has been receiving regular briefings from the Acting President and he has also been going through the print and electronic media to follow the happenings within the country.

“After the meeting, he gave directives on some areas we should look at so as to enhance our operations in the country.

“In his address, he talked about the unity of the nation which is non-negotiable and all the military have been fully instructed to ensure that that directive is carried out to the letter.”

On whether there was a directive from President Buhari on alleged composition of secret service by the Indigenous People of Biafra, IPOB, he said:  “The issues of security, every security threat, all security threats were treated one after the other — ranging from terrorism to kidnapping, herdsmen/farmers clash, to the IPOB issue, all were treated. Comments were made as to what to do as regards those issues.”

Asked whether the military was mobilizing forces to the South-East as a result of IPOB’s continuous agitation for self-determination of State of Biafra, Olonishakin said: “Every security (issue), like I said, has been treated and we are going to enhance our operations in all the areas we need to do that.

“Like I said, he has given the necessary directives which will be carried out by the military and the security agencies.”

On the assurance the service chiefs gave to the President on his directive, the Defence chief said: “The assurance is that he also directed that we must ensure that the lives and properties of the citizens are protected and we must make sure that we secure the whole nation and also that troops that are outside carry out their jobs effectively.”

On the renewed onslaught of the Boko Haram in the North East, he said:  “On the Boko Haram issue, you all know it is asymmetric warfare. It is not that the Boko Haram has stepped up their game, it is just the issue of suicide bombing that has been the problem.

“Of course, we are also working with intelligence agencies to make sure that we address that menace.”

“It is a wrong approach. You cannot treat Boko Haram and an open organization like IPOB in the same manner.”

We’re not  surprised, but  IPOB’s not a  terrorist  organisation —ECA, Igbo leaders

In its reaction, Eastern Consultative Assembly, ECA, through its Secretary, Evangelist Elliot Ugochuchukwu-Uko, said:  “We are not surprised; it is part of the hatred. He can lump IPOB together with ISIS. We even expect him to change the name of Enugu to Islamabad.

“We are asking that Nigeria be restructured. Those killed  before were not armed and did not commit any known offence.

Also, the Igbo Leaders of Thought , ILT, said it would rather watch than comment on the explosive situation.

The secretary, Professor Elochukwu Amucheazi, said: “We won’t talk now; let’s watch the development. Ecclesiastes Chapter 3 in Bible tells us that there is time for everything. It says that to everything, there is a season and a time to every purpose under the heaven…”

Also reacting, the leadership of the Indigenous People of Biafra, IPOB, in Ebonyi State, said the President’s order was divisive and did not address issues necessary for national unity and development.

In a statement in Abakaliki, the Deputy Coordinator of IPOB in Ebonyi State, Mr. Ugochukwu Nweke, said: “What IPOB is doing is legal and we are not afraid. The President should address Boko Haram in the North-East, the unfortunate quit notice by the Arewa youths, how to boost the economy and the welfare of citizens in Nigeria.  He doesn’t have the right to threaten IPOB or any group.”